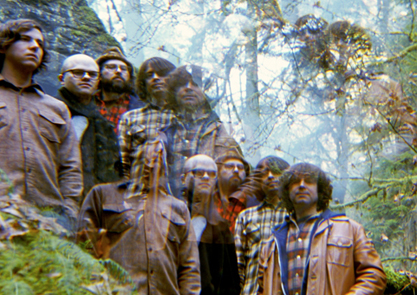 Come and spend some time in the aural forest of Portland, Oregon’s Eternal Tapestry. This band of  ‘psych-hikers’, as one critic memorably describes them, have always drawn inspiration for their music from the dense native forests that surround their hometown. Delicate keyboard and synth lines cast dappled sunlight on their verdant, psych-rock sound-scape; looming organ drones and pentatonic guitar riffs have a lusciousness that is met with interweaving drums and bass of just the right heaviness. The whole sound ebbs and flows organically in alternately meditative and exuberant space rock surges, flecked with earthy, stream of consciousness-inflected vocals.

Aptly, newest release for Thrill Jockey, ‘Wild Strawberries’, was recorded in a cabin next to the delightfully named Zigzag River. Prior to the recording session drummer Jed Bindeman came across 700 Phish cassette bootlegs, and it was on these cassettes that the sessions for Wild Strawberries were taped, using an eight-track recorder, a palimpsestic approach that reveals much about their vision. Whilst Eternal Tapestry encompasses the joy of meandering and improvisation, this band is not formless or overgrown: there’s shape and purpose to their explorations. Perfectly judged embellishments of improvisatory saxophone add to the contextualisation of the band within an even richer seam of American aesthetic and music traditions, rooted in the West Coast and beyond, including funk, Americana and traditional folk as well as the more lysergic glades of rock. A golden heritage indeed. This is a band dreaming of a magical path to the Sun, and we’re following on their tails.