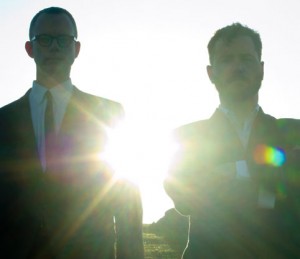 This year Supersonic will welcome Matmos (M.C. Schmidt and Drew Daniel) to the fold. This American duo have been manipulating raw materials into surprisingly accessible forms, often supplemented by traditional musical instruments played by them and their large circle of friends and collaborators (Bjork, Robert Wilson, Marina Abramovic etc.). The result is a model of electronic composition as a relational network that connects sources and outcomes together; information about the process of creation activates the listening experience, providing the listener with entry points into sometimes densely allusive, baroque recordings. Their most recent album, The Marriage of True Minds, was released in 2013 by Thrill Jockey Records.

15questions.net recently sat the pair down for a Q&A. We’ve picked out a couple of questions for you below but the interview can be read in full here and it’s well worth doing just that.

When did you start writing/producing music – and what or who were your early passions and influences?

My starting point wasn’t music but sound- I started making cut-ups with tape recorders when I was fifteen, editing funny little skit-like things out of records and the radio with a pause button. I did it because I had read about William S. Burroughs’ experiments with tape recorders and cut-ups and wanted to try that out myself. So I acquired a lot of cheap little plastic tape recorders and began to make pause-button edits, and then started doing primitive multi-tracking of noises and voices by having four tapes play in a room and recording them all to a fifth tape deck. I loved, in order, disco, heavy metal, hip hop, new wave, punk and hardcore and then industrial and noise. That’s the cycle from age 11 to age 16.

What do you personally consider to be the incisive moments in your artistic work and/or career?

The most literally incisive moments were the recordings of cosmetic surgery that generated our album A Chance to Cut Is A Chance to Cure: rhinoplasty, chin implants, liposuction.

I think meeting Martin was the catalyst for it all. We made a tape called Matmos in Lo Fidelity that was entirely in 8 bit. It was just an exercise in cutting and editing sound intensively, with lots of hyper juxtapositions and ridiculous noises – that was so fun to make, and was the beginning our romantic and musical partnership.

There seem to be two fundamental tendencies in music today: On the one hand, a move towards complete virtualisation, where tracks and albums are merely released as digital files. And, on the other, an even closer union between music, artwork, packaging and physical presentation. Where do you stand between these poles?

We are old fashioned and we like artefacts. I have watched enough turnover of formats in the digital domain to be pretty sceptical about the longevity of digital environments and digital storage. Remember floppy disks? 3.5 diskettes? Memory sticks? Zip drives? SCSI ports? I do. Implicitly, I am collector scum and I still have big boxes of noise cassettes from the 1980s that I love, and tons of vinyl at our house, and old photocopied zines. I think digital is great and has lots of advantages and obviously it’s the dominant media/medium/pathway at the moment. But I don’t see people twenty years from now caressing their old mp3s, while I am still listening to my Misfits record that I bought in high school.

MCS says:  Decidedly toward the latter- that’s why we’ve released the Ganzfeld EP in a limited edition with headphones, eye goggles and extensive liner notes about the project. We want people to be involved in a tactile way and to be informed, through language and image, about what they are hearing. That makes us old fashioned- we’re attached to the metaphor of “the album” as in the “photo album”- something to touch and leaf through and pore over in order to feel a connection.

Usually, it is considered that it is the job of the artist to win over an audience. But listening is also an active, rather than just a passive process. How do you see the role of the listener in the musical communication process?

We work to solicit interpretive desire, so that the listener feels a need to understand and learn about what she is hearing. We want to activate listening by foregrounding both jarring encounters with real sound, sourced in everyday life, with everyday objects and heavily artificial / constructed / untrustworthy moments. We hope that the tension between these components will make people worry about what it is that they are hearing and that it will generate a kind of audio-puzzle for them. That’s our hope. But of course you can’t actually determine how and in what way people encounter your work, and that open-endedness is just part of the process.