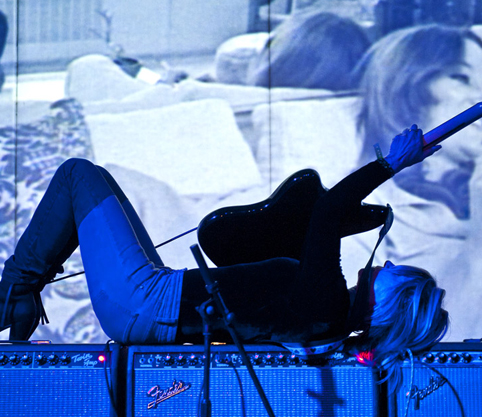 Body/Head at Supersonic 2012 by Katja Ogrin 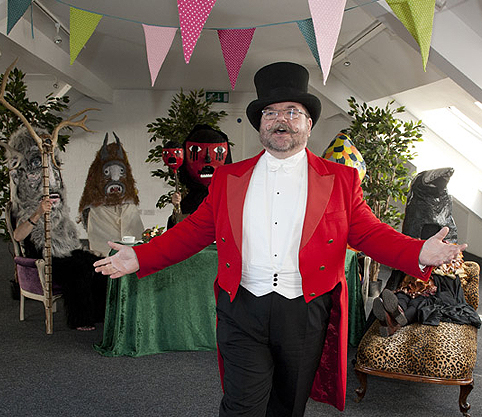 Supersonic Tea Party with The Outcrowd by Katja Ogrin 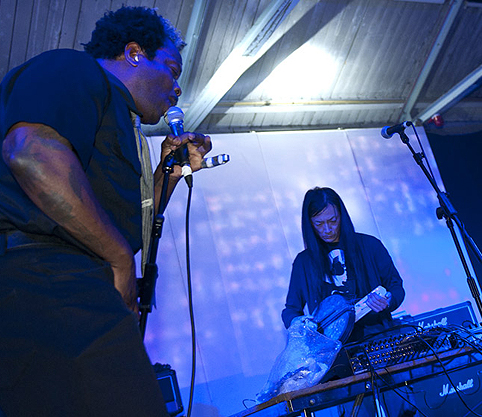 Merzbow joined by Eugene + Niko from Oxbow by Katja Ogrin 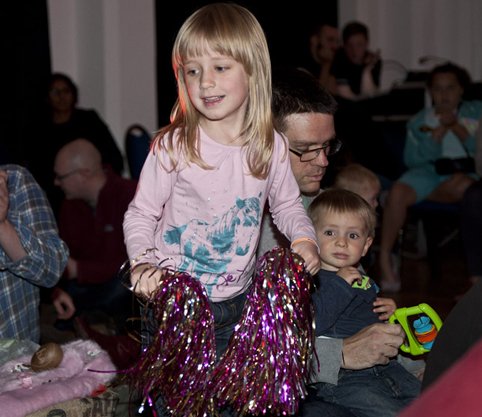 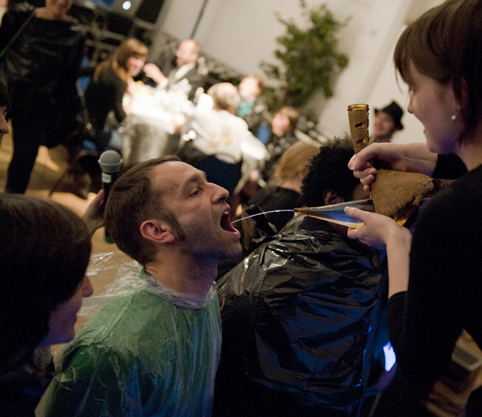 This year was a very special edition of the festival, marking our 10th anniversary and we were delighted by so many unexpected moments which made this our most memorable event to date. Over the next couple of weeks we will begin to collate a collective memory of reviews, photos and video footage, please feel free to add your own highlights and photos etc.
From all at Capsule HQ a massive thanks to our wonderful audience, artists and team x

Previews
The Guardian – “Birmingham’s Supersonic Festival has quietly been doing its thing for 10 years. One imagines that’s the way they like it, but theirs is work that should receive all the acclaim possible.”
Culture 24 – “It seems clear that once again the Capsule arts and music organisation have ensured that their autumn festival, which is celebrating its tenth anniversary this year, retains the commitment to outsider creativity in all its forms that has made the event more than just another blip on the crowded UK festival circuit.”
Culture 24 – “Supersonic is perhaps the British festival of choice for your discerning underground listener, and their art programme is equally distinctive for 2012.”
Clash Magazine – interview with Lisa co director
The Line of The Best Fit – “The festival has always showcased an impressive, obscure, challenging and fascinating range of acts, and also offers festival-goers the opportunity to attend a range of classes on everything from fanzine-making to electronic instrument creation.”
Stool Pigeon – “Now a decade in the running, the Birmingham festival has helped foster a new tradition of experimental and avant-garde music, with artists and fans both from the UK and further afield making an annual pilgrimage to the site in Digbeth.”
Brum Notes – “Supersonic is a festival that will surprise and astonish, so expect the unexpected…”
The 405 – “There’s a multitude of reasons why music and art fans travel from across the world to Birmingham’s oldest quarter for Supersonic each year; adventures in sound and vision delivered by some of the most exciting and imaginative artists performing and practicing only just begins to describe this live and electrifying festival experience.”
Trash Hits – “Supersonic pushes the boundaries of what you can do with a music festival in ways that traditional metal fests can’t even dream of.”

Feel free to add your photos to our Flickr pool
http://www.flickr.com/groups/supersonic/
Greg Neate – incredible photos of the fest
Katja Ogrin – our official Supersonic photographer has yet again done us proud
Mike Modular – an amazing set of images of artists performing
and there is also Festigram full of wonderful photos taken by you at the festival
e-festivals – have created a gallery of images taken at the fest
Stéphane Emanuel Schneider – has taken a beautiful set of photographs over the festival weekend
Drowned In sound – Supersonic in photos
Dummy Magazine – Incredible set of portraits of some of the artists who performed including Jarboe, Lichens and Tim Hecker
Staf Magazine – The wonderful Spanish magazine collates a overview of the fest in photo form

Reviews
Stool Pigeon – “Evolving, challenging music that demands interaction from the audience is Supersonic’s speciality.”
Quaint Living  –  Explore both the festival and city
Beard Rock – “the best experimental music festival in the world right now.”
Lumber Jack Joe – Created one of our fine Supersonic illustrations this year
Totally Dublin – an overview of all that they saw & heard
Domestic City – “For a festival that maintains a consistently prolific line-up, it’s quite hard to believe that they’ve hit this milestone so soon.”
Nine Hertz – “And what a way to celebrate ten years of diverse, unique and bonkers music than to fill it with one of the most engaging line-ups yet. ”
Culture 24 -“Much like the festival itself, it’s loud, innovative, occasionally disorienting, and very enjoyable – the perfect way to celebrate ten years of sonic and artistic adventure.”
Musique Machine – “Contrast, without which we cannot perceive the world, is a phenomenon that defies homogenisation, where pleasure is relief from pain, and pain can be a prime for pleasure; where art is opposed to commerce, and the mundane is pushed back, often all too temporarily, by creativity. Capsule, the curators of the annual Supersonic Festival clearly understand this: from the coarse granularity of its urban, industrial environment so strongly set apart from the fallow fields of most other festivals, to the finer details of its handpicked programme of new music, installations, workshops, walks and talks, all deftly juxtaposed across a long weekend, the festival never fails to nurture new connections and rupture old ones.”
Kindermuzik – a Dutch magazine “What festivals – a few exceptions, such GOGBOT in Enschede and the Tilburg Roadburn – here in the Netherlands their ear increasingly hanging to commercial interests and thus come up with a program that correspondingly more to the larger denominator is directed, find in Birmingham a highly fertile ground for a wide selection that even the most die-WIRE reader can pick up the heart.”
Louder Than War – “Louder Than War’s Adrian Bloxham returned to Supersonic Festival for the third time this year. As ever (and as anyone who’s ever been) he was utterly blown away. Here’s his review.”
Vice –  John Doran writes another edition of Menk from the festival
Felix – “Since the line-up was announced some months ago, I had been excited about attending. The slogan on a lot of the commemorative t-shirts was ‘celebrating 10 years of adventurous music.’ My experiences ranged from the obscure to the experimental to the just plain weird, so the slogan seems apt.”
KYEO.TV – “It’s hands down the most musically adventurous and enjoyable festival I’ve ever been too, and it’s friendly, well-run and inventive to boot.”
E-Festivals – “The music is definitely only half the story of this festival though, it was hard to find time over the weekend for many other parts of the programme that sounded appealing; notably the talks, theatre, historical walks and hands-on workshops.”
Happiness In Uppsala Part 1 + part 2 – French Magazine review of Friday + Saturday at the festival – They particularly love Richard Dawson from what I can translate
Sleeping Shamen – The writer is less than keen on Birmingham itself but has nothing but praise for the festival “Salutations to the organisers and all the superb bands who truly make it (drum-roll for the appallingly cheesy ending) both SUPER and SONIC.”
Art Rocker – “whatever shape Supersonic takes we are confident it will remain the very best place to discover and celebrate pioneering experimental music.”
Area Magazine – Read the magazine online and on page 34-35 there is a review of the Sonic Feast created by Companis with photos by Katja Ogrin.
Brum Notes – Read the November issue which includes a review of Supersonic by Ross Cotton
The Quietus – “To imply that Supersonic 2012 was the best ever would imply that the festival has nowhere left to go or nothing else to improve upon. To have reached its second decade is precisely the challenge that Capsule is more than capable of meeting.”
Drowned In Sound – “We thrust ear-plugs into our pockets and head to a Custard Factory in the hope of feeling something, anything, for a taste of the experimental, the inspirational, the innovative, the…”
Ponto Alternativo – Portuguese magazine covers day 1 + day 2 + day 3 of the festival
Thumped – ” Refreshing, challenging, thought-provoking and a whole lot of fun, Supersonic 2012 was the best festival I’ve attended in a long time. Ten more years of this please.”
Link 2 Wales – “This eclectic, eccentric weekend festival celebrates its tenth year and I join them for my third one-day-only visit over that decade.”
Raw Nerve Zine – “The only criticism I could make of Supersonic is there is almost too much. And that isn’t really a criticism at all.”
Middle Boop Mag – “The amazing festival was over, leaving everyone craving for more Supersonic goodness.”

Blogs
The Hub – Get your aural 5-a-day!- write up about our Art of Listening Panel
World of Fox – talks about his experience of being part of the Lash Frenzy performance
Toastie Music – The guys from Jabberwocky describe their weekend selling toasties & our crowd
Ore – Tour diary rehearsing with the Oxbow Orchestra + performing with KK Null
Felix – The student voice of Imperial College London since 1949
Stranger Passing – ‘‘Festival’ could be interpreted as a slightly patronising term for Super Sonic Festival because its ambitions go well beyond the boundaries and resemblances of the summer festivals we have all become accustomed to seeing.”
Stephen Fowler – Describes his experience of bringing the Wildman life drawing class to Supersonic
Mr Underwood – an epic tale of creating our birthday noise boxes, performing as Ore, collaborating with KK Null and then joining the Oxbow Orchestra – boy we make him work hard!
Crossroads of Sabbath – Black Sabbath historian Rob Horrocks has collated some short reviews of his walking tour
Rocket Recordings – home to the likes of Goat + Gnod pull together a round up of their artists at Supersonic
French – aka Richard Sayer describes the work he contributed to our exhibition + his noise box design
Free School – A round of acts that Free School saw at the festival after they performed on the Friday night
Creaking Hovel – “A sonic accumulator that awakens once a year in the form of Supersonic festival, and spews forth an extraordinarily diverse spectrum of innovative and adventurous sound.”

Timelapse of the Vinyl Rally installation by www.tinnitusjukebox.org

Here’s a lovely montage put together by scott.simpson99