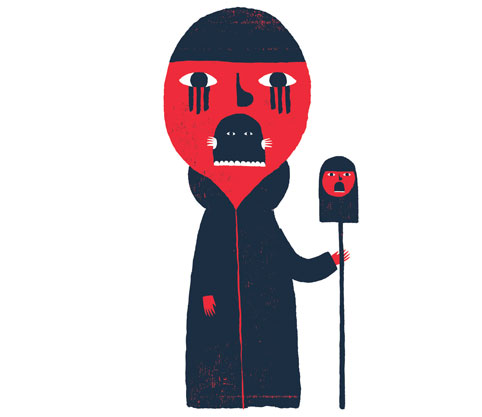 Describing themselves as “a shambolic visual collection of hoodlums and battered psyches”, it’s clear that the Outcrowd aren’t your run-of-the-mill arts collective. Since their humble beginnings in 2004 by two artists named Lawrence Roper and Simon Peplow, the group have put on a number of exhibitions, shows, workshops and installations, all with a very distinct and engaging visual aesthetic. The Outcrowd has blossomed into a large network for creative individuals to express themselves in whatever manner they so desire, and this time they have a real treat in store for Supersonic attendees.

After investigating the curious and bizarre old traditions based around the area of Birmingham’s birth place, the crossing of the River Rea (or Digbeth as it’s known today), the Outcrowd stumbled across tales of the lost Festival of the Rea. This long-forgotten celebration was born out of Pagan and traditional religious traditions, and its influence can be felt in similar festivals still celebrated throughout Europe. Rather than allow this ancient tradition to disappear into obscurity, the Outcrowd will be re-creating the Festival of the Rea at Supersonic this year (a sort of festival within a festival, if you will), with a host of mythically inclined artists in tow. The collective will construct a shrine, known as the “house of Beorn”, the first to be built in the area for over a century. Festival goers are encouraged to contribute their own offering to this ramshackle, weathered and sacred cabin during the festivities, so so you too can play a part in keeping this esoteric practice alive!

Artists confirmed for the exhibition are: