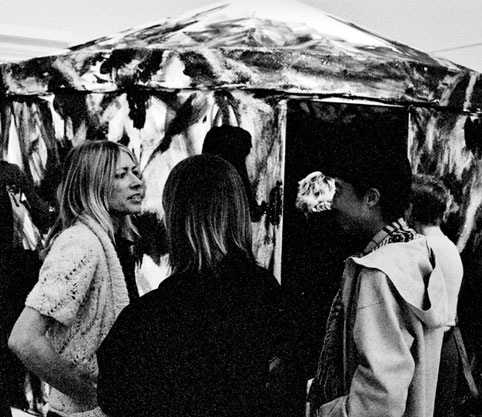 Reverse Karaoke is a collaborative installation by Kim Gordon and Jutta Koether. It consists of a painted Yurt style tent housing a lo-fi rehearsal set-up with guitar, microphone, bass, and drums and a basic PA system. The visitor is invited to play the instruments and record their own music along with a pre-recorded vocal track of Kim Gordon’s voice. The track is recorded live by a sound engineer who burns two CD copies of the track, while the visitor(s) decorate two CD sleeves using materials in the gallery. One copy of the CD becomes part of the piece itself on display in a record box, and the other the visitor takes home.

Reverse Karaoke was commissioned by Electra for ‘Her Noise’, South London Gallery, 2005, and was complemented by a series of evening performances in which artists were invited to use the piece’s set. These events featured Jenny Hoyston (Erase Errata), Heather Leigh Murray, Christina Carter, Ana Da Silva (The Raincoats), Partyline and Spider and the Webs. Since 2005 the work has toured Europe extensively and been exhibited at Magasin-CNAC, Grenoble, France; MAK, Vienna, Austria and Wysing Arts Centre, Camrbidge, as well as being included in the major touring exhibition ‘Sonic Youth Etc.: Sensational Fix’

Electra is a London based contemporary art organisation which curates, commissions and produces projects by artists working across sound, moving image, performance and the visual arts. http://www.electra-productions.com/

Reverse Karaoke will be open over the Supersonic Festival weekend at Eastside Projects.