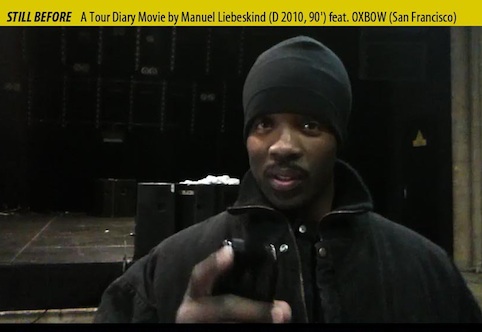 ‘Still Before’, a film by Manuel Liebeskind, draws the most intimate tour portrait of this exceptional band from San Francisco and is perhaps as close as one can come to the exhaustion of everyday tour life.  Here at Capsule HQ we’ve only seen the trailer, but, believe us, that was more than enough to whet our appetites.  ‘Still Before’ is also highly notable for being filmed entirely on an iPhone with a 640×480 pixel resolution, probably the first feature-length to be so.

We can’t imagine it would be easy to get close to a band like Oxbow, so how did Liebeskind do it?  Turns out he’s their former booking agent, soundman and general man-Friday and thus the band gave him unprecedented access.  Through his film, Liebeskind attempts to uncover the obsessions, machinations and thought processes behind making, playing and touring music that embraces art as though its life depended on it.  Across five countries, over a dozen shows, and in front of rapt audiences, ‘Still Before’ explore the whys of art creation, the touring life and the motivations for continuing the process over two decades.

STILL BEFORE from Manuel Liebeskind on Vimeo.

One Response to “Film week, day 3: ‘Still Before’, a film about Oxbow”