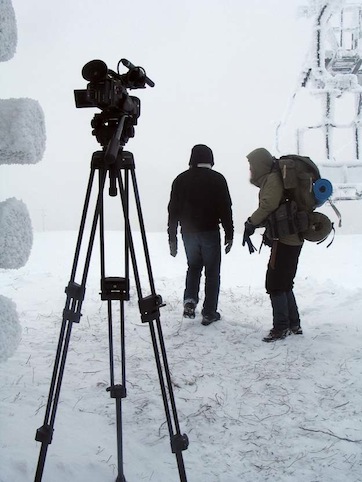 Supersonic 2011 are pleased to present ‘Man With A Video Camera’, a documentary about the Finnish band Circle.  Happily, Circle themselves are also performing this year, thus squaring the, um, circle.  In fact, although we say ‘documentary’, ‘Man With A Video Camera’ is closer to an anti-documentary.  As with, say, ‘Lost In La Mancha’, Terry Gilliam’s film-about-making-a-film-of-Don-Quixote, the actual story appears to be somewhere else, somewhere unplaceable.  Perhaps that’s because filmmaker Esko Lönnberg himself has come from elsewhere, into Circle’s world…

Lönnberg left his middle-class job in Sweden and returned to his hometown of Pori, Finland to pursue his artistic desires.  The shooting for the film mostly takes place in the countryside where the band is recording their next album. The circumstances turn out to be chaotic and most of the band appear totally uninterested and unengaged.  But, Esko tries to keep the crowd together, even though he does not know himself if he is going to end up with fiction or non-fiction.  Throughout, Esko captures everything essential and unessential on video while the band plays.

In the end, this unique film tells you all you need to know about documentary-making, its perils and its rewards.