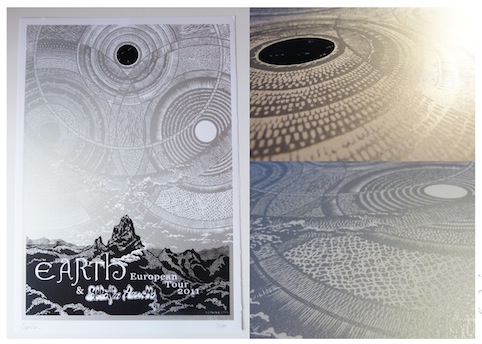 Simon Fowler – interview with an illustrator/printmaker

London based illustrationist and printmaker Simon Fowler has been commissioned to design a poster for this year’s festival. Previously creating pen and ink works for the likes of Earth and Sunn O))), Simon returns to Supersonic after debuting his art in 2010 for the From Light to Dark exhibition.

“(Last year) was the first time I attended Supersonic”, says Simon. “It’s the festival I’ve enjoyed the most, because it’s curated by people who really care about what they’re doing. I’ve met so many people; it’s just an incredibly well crafted event”.

Simon has also developed a keen creative relationship with previous festival performers, dub-psych duo Devilman. “Within a year, I’m 80% of the way through the artwork for their album”, says Simon. “I think this Devilman piece has been one of the most enjoyable. “It’s an idea that I had quite a long time ago and it fits perfectly with their music. I’ve been able to put more time into it rather than a typical commission. It’s nice to be crossing genres and not just being pigeonholed in metal or doom”, he says.

“Music plays the biggest influence in my creative process”. Fowler’s analogue artwork seems to have flourished extensively over the last few years. A journey that is well and truly rooted with contemporary musicians. “I’ve been working with Stephen O’Malley since about 2009, he’s one of my main collaborators,” explains Simon. “That’s knocked on into doing stuff for Earth. I did the artwork for the reissue of their first album last year, and I’m working on a poster for Wolves in the Throne Room at the moment. I was given a brief a couple of weeks ago from them, giving me the visual ideas they had to tie in with their album. I haven’t actually heard the album, so it’ll be interesting to see their performance (at the festival) against what I’ve created”.

Though Simon often feels that viewers sometimes misinterpret the ideologies of his art. “A lot of people try to describe my work as being dark, but I don’t necessarily see it like that”, says Simon. “I think it’s more expansive, and maybe its just the music it’s associated with; connotations of darkness. I thought it was quite natural, reflecting natural environments and the detail that’s in those environments, taking something that could be industrial on the surface, quite ugly, but if you really analyse all of the individual elements, you kind of see the beauty and geometry within that”.

And what are Simon’s plans for the future? “For the rest of the year, I’m going to be talking to Dylan Carlson and working on a project of his, not necessarily Earth but something he’s thinking of doing”.

Simon Fowler recommends you check out: “Fire! with Oren Ambarchi (it looks pretty eclectic!), Tony Conrad, Cloaks and Scorn”. Check out Simon Fowler’s poster design at the festival, and be sure to bring an extra bit of cash for a print!