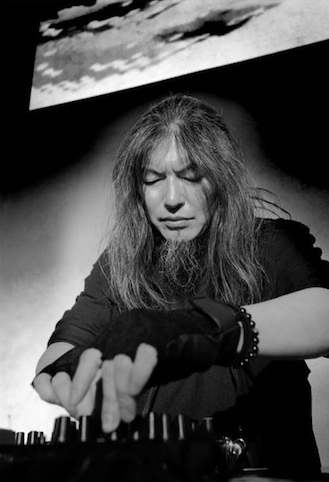 Hiroshi Hasegawa was in the band C.C.C.C., one of the biggest Japanese noise groups, and Astro is his solo project.
Born in 1963, Hasegawa first worked on improvisation with just his voice and drums before forming C.C.C.C  in 1989.  Astro began in 1993 as a project using analog synthesizers.  He formed Cosmic Coincidence as a new configuration of C.C.C.C. in 2010 with the members Manuel Knapp and Rohco.  To date, he has released an enviable 50+ releases across all his projects.  Throughout, Hiroshi describes his playing style as “like drifting between the meditation and awakening state with electronics”.  Astro in the recent past plays with electronic-noise, frequently an assault on both his equipment and the audience.  It’s as close to a rock-band destroying its gear in last-rites death throes as we’ve seen in the recent electronics scenes.  Judge for yourself in the clips below.