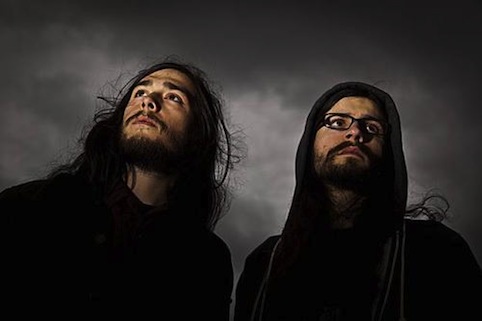 
Supersonic 2010 attendees will perhaps need no introduction to the stunning dust-trails of sound that San Franciscan duo Barn Owl create.  The band were so well received that we just had to get them back for Supersonic 2011.  In the past year, the praise for their mesmerising drones and layered feedback has slowly built up into a huge wall of superlatives.  It’s taking all our strength here at Capsule to avoid waxing lyrical about “hauntingly beautiful sonic waterfalls” and the like!  Rock-A-Rolla even went so far as to say that their 2010 album ‘Ancestral Star’ on Thrill Jockey was “the most significant experimental drone album since [SunnO)))’s] ‘Monoliths & Dimensions’”.

What you definitely get with Barn Owl is a hugely powerful immersive experience.  Frequently playing in front of modified super 8 footage, the twin guitars of Evan Caminiti and Jon Porras intertwine instinctively, equal parts slow-burning twang and spaced-out feedback drone.  It’s hard to stop those superlatives flowing.  The band have just released a new EP ‘Shadowlands‘ that adds a devotional aspect reflective of artists like Popul Vuh (especially their soundtrack for the Werner Herzog film ‘Fitzcarraldo’) and Alice Coltrane, and their new full-length ‘Lost In The Glare‘ will be out on 13th September.  (Free mp3 here.)  Both Caminiti and Porras are solo artists releasing on labels like Root Strata and Three Lobed Recordings and Caminiti is also an established visual artist.

Barn Owl – Light from the Mesa from Thrill Jockey Records on Vimeo.