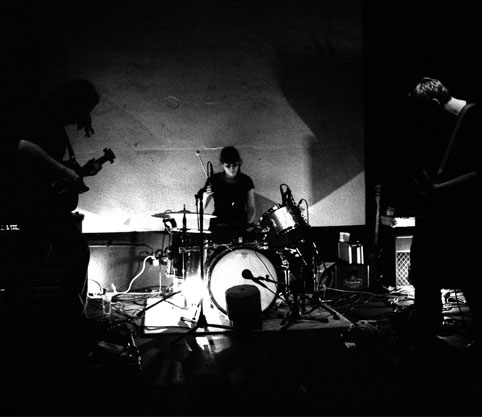 We’ll be running regular Q&As with the Supersonic 2011 artists in the run-up to the festival.  Keep checking back regularly for updates.  To kick us off, we have one of the newest additions to the line-up: Kogumaza.  Over to guitarist Chris Summerlin for his insight into the band’s mesmeric fuzzouts, plus an important health and safety warning.

1. Which five words describe what you know about Supersonic?
“I think I’ve gone deaf”

2. What can people expect of Kogumaza at the festival?
I’m not best qualified to answer – my friend Hoppy said we were like a hot bath for his ears so I’ll go with that.  A hot, never-ending bath made of fuzz and echo.

3. Why make music – what does it do for you that nothing else does?
Sometimes when you’re experiencing music, usually live music, it can feel like no one party (the audience or those making the music) is in charge and there’s some sort of 3rd element involved. Like the experience transcends the sum of the parts. It doesn’t happen often (rarely as an audience member and even less so as the person making the music) but it’s enough of a unique and beautiful situation to keep returning to music-making again and again in search of it. I can’t think of any other sensory experience that is able to take shape quite like that. Apologies for sounding like a hippy.

4. Who else on the bill are you hoping to see?  (And why?)
I helped promote a show for Bardo Pond about 14 years ago in a bar in Colchester, Essex. It was the first proper band I ever helped put on. The bar had a noise limiter. They soundchecked and it kept showing red but didn’t seem to do anything bad like turn the power off, so we thought “to hell with it” and left it loud. Turned out that when the sensor went red it turned the room lights off so they played most of the show in the dark and it was awesome. That’s an important lesson to learn right there. I’m really excited that they’re playing. Looking forward to seeing Skull Defekts and Part Chimp too. Supersonic’s always been about surprises as well though, so I’m hoping the best thing on the bill is something I’ve never heard of before.

5. Finally, your essential ‘surviving-Supersonic’ items are…
Ear plugs for sure.  Also, in the middle of the outdoor area there is this weird metal pipe-like fixture sticking out of the ground with warning tape on it. I think they slot a fountain in it normally. At about 1am, if you’ve had your brain fried
enough, it might start to resemble an empty beer can, just sitting there. No matter how good you feel and how much you want to express how amazing Harvey Milk were (as was the case), don’t take a run up and kick the “can” in celebration of the majesty of rock like my good friend Ross did 2 years ago because you’ll spend the rest of the night in Sellyoak Casualty waiting for some nurses to stick your toes back together.

Kogumaza live at Nottingham Dot to Dot Festival in May 2011: