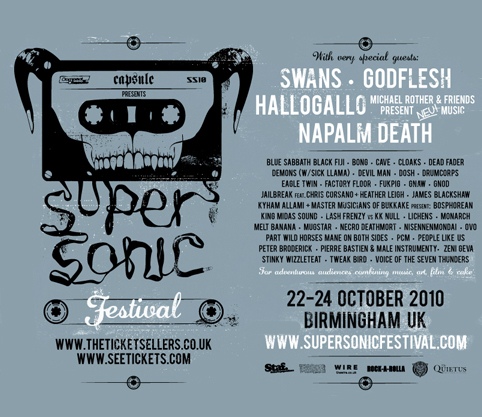 Following the news that the 2010 edition of Birmingham’s acclaimed annual Supersonic Festival will be headlined by NAPALM DEATH, SWANS, GODFLESH and HALLOGALLO, Capsule are pleased to announce that a limited number of individual day tickets are now on sale, priced £20 (Friday) and £35 (Saturday/Sunday), with weekend tickets on sale at £75.

Friday night will be headlined by Birmingham extreme metallers Napalm Death, Saturday by Godflesh, for their first UK appearance in over 10 years, and Sunday by two equally unmissable acts, Swans and Hallogallo 2010 – Michael Rother + friends play the music of NEU!

Supersonic are also excited to reveal the final round of incredible artists who will be appearing at this year’s festival. From Doom to dun step and folk, Supersonic 2010 is set to cement the festival’s reputation as one of the most original and eclectic music festivals in the UK.

Regarded as pioneers of experimental music by the likes of Sonic Youth and Merzbow, KK Null’s incredible collective Zeni Geva will be bringing their prog-hardcore to the Supersonic stage, and KK will also be appearing alongside Birmingham sound artist, Lash Frenzy, in a truly unmissable performance. Also confirmed, Kevin Martin, creator of experimental dancehall project The Bug, with his incredible, critically acclaimed new project, King Midas Sound.

Aggressive, noisy and hailed by many as the successor to Napalm Death, Fukpig will be playing their new breed of Birmingham grindcore, along with heavy, heavy dub from Devilman aka DJ Scotch Egg and Dokkebi Q. Also confirmed, Monarch, with the demonic, throat-shredding shrieks of Emilie, whose petite appearance belies one of the harshest throats in the underground Doom spectrum.
Following a knock-out 2009 performance, Nisennenmondai return, bringing their driving rhythm section and metallic guitar sound, along with Mugstar, who will be playing their unique underground mix of psychedelia and krautrock.  Also confirmed, the most exciting new band to come out of London, Factory Floor, who will also be putting in one of their legendary brutal, live performances, and there will be an unmissable Cloaks DJ set from Steve Cloaks, who will be playing strictly Cloaks material only, in an exclusive performance for Supersonic 2010. There will also be heaviness, good times and volume a-plenty from Birmingham’s very own Stinky Weezleteet and distorto-death groves from Brighton’s Dead Fader.
World music meets psychedelic rock in a unique performance from Khyam Allami and Master Musicians of Bukkake, combining the sublime Oud playing of Iraqi musician Khyam Allami with the 7-piece out rock unit, Master Musicians of Bukkake. French composer and surrealist inventor Pierre Bastien will also be bringing his musical machinery, which he has been making since the 1970s, and will share the bill with Male Instrumenty, the fantastic five-piece orchestra of toys and small instruments from Poland. Also, the “painfully young and unnervingly talented” American multi-instrumentalist Peter Broderick, who will be exploring minimalism and instrumentalism with tinges of folk.

One Response to “Day tickets released for Supersonic 2010”