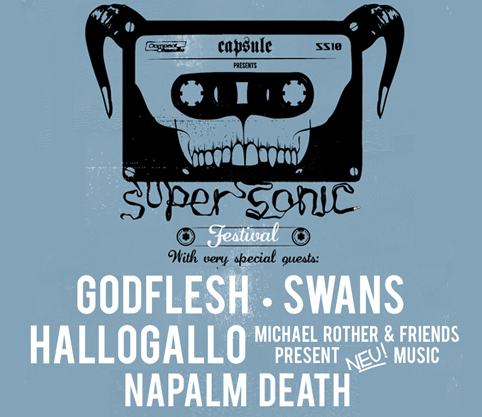 Following the news that the 2010 edition of Birmingham’s acclaimed annual Supersonic Festival will be headlined by SWANS and GODFLESH, Capsule are excited to announce a further round of live acts who will also perform at this year’s festival, including HALLOGALLO 2010 and NAPALM DEATH. Tickets are now on sale!

Capsule are also excited to confirm that unquestionably the most influential band in extreme music’s ferocious history NAPALM DEATH will be performing in their hometown to make their first ever Supersonic Festival appearance. Acclaimed as the creators of Grindcore, Napalm Death will be pushing the envelope of metal to new extremes in what is guaranteed to be an unforgettable performance.

“We are very much looking forward to playing Supersonic this year. It’s always great to play a hometown gig, and with this festival being so diverse musically it’s going to be even more fun for us as we rarely get the chance to play such events –  and on the same stage as SWANS, well what can I say?” – Shane Embury, Napalm Death

Also confirmed are an incredible, eclectic mix of music and visual artists, including PART WILD HORSES MANE ON BOTH SIDES with their mesmerizing and unforgettable avant-primitivism,  oVo with their incredible combination of heavy riffage, bombastic drumming and unforgettable vocals, as well as a return from the dark lords of Drum and Bass, PCM. DOSH will be performing, complete with mandatory pots and pans, as well as DRUMCORPS, with their unique, high-energy mix of music production values and the raw power of American hardcore.

TWEAK BIRD are also confirmed, bringing their big drums, fuzzed out baritone guitar and tandem spacey vocal melodies, and also CAVE, with their sickeningly tight drum and bass. There will also be multi-sensory art in the form of DJ and multimedia artist Vicki Bennett, aka PEOPLE LIKE US, and dark visual music trio DEMONS (W/SICK LLAMA).

This latest announcement forms part of a series of line up announcements for Supersonic 2010 with many more exciting acts and artists to be revealed in the coming weeks and months.