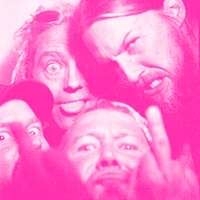 The Accused – US
Formed in 1981 in Oak Harbor, Washington by bassist Chibon ‘Chewy’ Batterman, Dana Collins and guitarist Tom Niemeyer. John Dahlin was the vocalist from 1982-1984. The addition of Blaine Cook (frontman of Seattle hardcore punk group The Fartz) fit nicely into the group’s migration towards a more heavy metal-based sound. In 1984, The band dubbed their style “splatter rock,” in homage to their favorite genre of horror films. Their hybrid musical formula was distinguishable by Blaine’s unusual choking-sound vocals, Niemeyer’s muted, choppy, buzzsaw guitars, dark metallic riffs, and rapid-fire drumming. The band are also responsible for creating the wild, zombie mascot Martha Splatterhead, whose likeness (created by Niemeyer) adorns most of their albums and many of their promotional items. The Accused recorded five albums, three EPs, and over 100 songs between their 1981 inception and 1990s hiatus.
The current line-up consists of Brad Mowen (also a member of Master Musicians of Bukakke and former member of Burning Witch and Asva), Dorando Hodous (also a member of Lesbian), Mike Peterson and Niemeyer.
http://www.myspace.com/kingsofsplatter