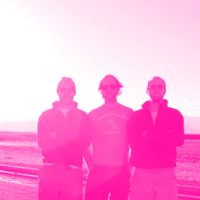 Pontiak – US
Pontiak is three brothers from the Blue Ridge farm country of Virginia. Van, Lain and Jennings Carney did not play music together until the three were older and moved to Baltimore from various points around the country. The results, swaggering guitar rock, straddle the line between a power trio and something whose expansive results exceed the trio format. Their broad song structures allow ample room for Van’s amazing vocals and guitar work to stretch and captivate. Julian Cope described them as “straddling a wide sonic rift valley, with references that stretch from the southern latitudes of Spain’s Viaje A800 to the northern majesty of Black Sabbath and Harvey Milk via the Doors.” Released on Thrill Jockey
http://www.myspace.com/pontiak