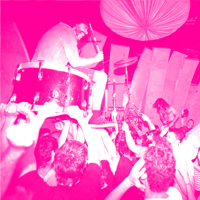 Monotonix Is an Israeli garage rock Band from Tel Aviv, Israel. Dissatisfied with the state of the music scene in their hometown the trio Monotonix formed in November 2005, influenced by Led Zeppelin, the Sonics, and Thin Lizzy. Shortly after forming, they began playing shows at local venues. They frequently set up on the floor among the crowd, playing shows raucous enough to result in the power being shut off or the police called in. Eventually finding themselves banned from most of the venues in Tel Aviv, the band decided to leave Israel so they could tour the United States and Europe. Their reputation as a band whose shows are not watched, but experienced. Monotonix have become known for setting themselves and their equipment on fire, stealing drinks from audience members to pour on themselves, and turning their shows into unabashed, frenzied dance parties.