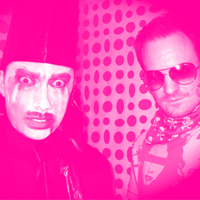 Atomized – UK
Atomized is the what occurs when you combine the tribal percussion and bellows of Lovely Feyde Rautha (Russell McEwan of Black Sun) and the electronic-vocal attack of Lea Cummings (Kylie Minoise) as they reinterpret some well known pop songs from the 80s, or as they describe – “Raped versions of pop classics by Madonna, Visage, Howard Jones, Haircut 100, & Culture Club.” As you can imagine, the songs sound nothing like the original chart toppers, dwelling in a nocturnal grey area between Mummy and Daddy era-Whitehouse (especially on their Madonna and Visage cover) and Swans at their minimal best.

Equal parts industrial, noise and no-wave – it’s a heavy and merciless release from these two, the audio equivalent to Boy George’s night terrors in the clink. This will be released from Lea’s Kovorox Sound label in the not so distant future, be sure to catch their debut performance of this material at Glasgow Implodes this March.
www.kovoroxsound.com/