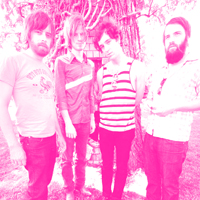 Arbouretum – US
Arbouretum first began in late 2002 as a vehicle for singer/guitarist David Heumann’s songwriting.  Since their debut album, Long Live  the Well-Doer, there have been several lineup changes that have included musicians such as Ned Oldham (Anomoanon), Walker Teret (Cass McCombs’ band), and Jennifer Hutt, as well as drummers Mitchell Feldstein (Lungfish) and David Bergander (Celebration).  The sweeping, atmospheric textures of the first record soon gave way to a more visceral, elemental approach.  Amplifiers were turned up, drums were hit harder, and songs crescendoed into spiraling, noise-soaked climaxes on the second full-length, Rites of Uncovering.
Released on Thrill Jockey in early 2007, the record garnered much attention and critical acclaim.  XLR8R called it “the best doom-folk record of all time” and Uncut referred to it as an instant “cult classic”.
http://www.myspace.com/arbouretum