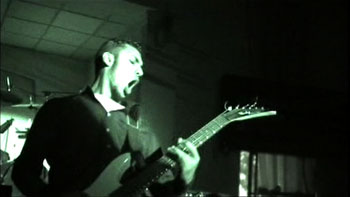 5.15 Talk: ‘From Heretics To Headbangers: Occultism, Rock and Pop Music in the UK’
Mark Pilkington takes a look at the roots of contemporary British occultism and their baleful influence on 20th century music. Pilkington publishes and edits Strange Attractor, ‘an irregular anthology of cultural.
www.strangeattractor.co.uk

6.15 Talk: ‘The Aesthetics of Grindcore’ – Nicholas Bullen
The work of bands like Napalm Death and Carcass grew out of a stew of influences including horror culture and 70s agit prop as well as hardcore punk. Nicholas Bullen, a founder member of Napalm Death, will be exploring some of the tropes and themes that have informed the grindcore movement since its explosion in the mid-80s.
www.monium.org.uk

7.30 Heavy Metal in Baghdad (Dir: Suroosh Alvi/Eddy Morett US 2007)
First feature documentary to emerge from Vice Films. Beginning with the fall of Saddam Hussein, this is the tale of Iraqi heavy metal band Acrassicauda and their heroic efforts to stay together and keep making music while their country disintegrated around them.
www.heavymetalinbaghdad.com/uk

9.35 Encyclopedia Pictura
Selection of work by a San Francisco production outfit who count Cryptozoology, Psychedelic Shamanism and Fruit Sandwiches among their interests. Includes a special 3D presentation of their recent video for Bjork, Wanderlust.

Plus a selection of other shorts and promos compiled by 7 Inch Cinema.
www.encyclopediapictura.com
www.7inch.org.uk

10.35 Supersonic Shreds
Or: Does Music Belong in Humour?
VJ Hooker (Filmficciones) has been voyaging across the outer reaches of the internet and various cinematic archives, and here presents the fruits of his quest. Includes shredded works by StSanders, aka Finnish video artist Santeri Ojala.
www.youtube.com/user/filmficciones70

11.35 Kipple
After creating a laff riot in the theatre at last year’s Supersonic, cut-up duo Kipple return with more modified video from the wrong side of the tracks.

12.05 Lost and Found Video Night
Full to bursting with clips and oddities from junkshops and skips across the world, the nine DVDs in the Lost and Found series attained a new high in home entertainment. Here you find some of the best bits; expect Bollywood numbers, penis songs and Crispin Glover.
With thanks to Chunklet and 5 Minutes to Live.
www.5mtl.com
www.chunklet.com

12.30 Southern Records Archive
A screening of the rarely seen documentary on THE OBSESSED made by JOE LALLY (Fugazi) in 1994. Featuring interviews with Ian Mackaye, Henry Rollins and others.
www.southern.net

1.30 Southern Records Archive
Rare live footage and videos from Southern’s past and present, everything from Boris to Mothlite.
www.southern.net