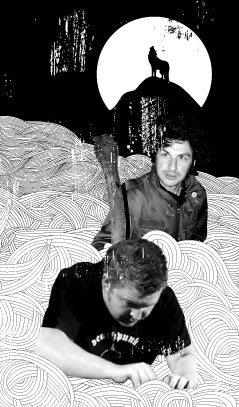 For too long Birmingham and the West Midlands have failed to celebrate what is rightfully theirs, to claim the city and the region as home of “Heavy Metal”. 2008 is the 40th anniversary of when the phrase “Heavy Metal” was first coined by journalist Lester Bangs. To follow on from last year’s series of talks and round table discussion we continue the exploration with a pair of presentations from experts in the field:

‘From Heretics To Headbangers: Occultism, Rock and Pop Music in the UK’

Mark Pilkington publishes and edits Strange Attractor Journal, an irregular anthology of cultural marginalia and ethnographic esoterica, and curates events under the Strange Attractor banner. His writing has appeared in The Guardian/ Fortean Times/ Arthur/ The Wire and Plan B amongst others.

‘The Aesthetics of Grindcore’
Nicholas (b/1968) is a musician and sound artist whose work explores approaches at the extremes of sound. In his twenty-five year history as a musician (as a founder member of Napalm Death – creators of the ‘Grindcore’ genre – and Scorn), he has appeared on numerous recordings and performed extensively across the globe. He maintains a number of ongoing musical projects including the electronic group Black Galaxy and the Monium label.

www.homeofmetal.com
Home Of Metal began in 2007 with a Metal Symposium held at New Art Gallery Walsall and continues with the development of an online archive mapping the regions heritage, Metal memorabilia, collections and oral histories will be collated through a series of 3 public open days held at Birmingham Museum & Art Gallery, Wolverhampton Art Gallery and New Art Gallery Walsall.