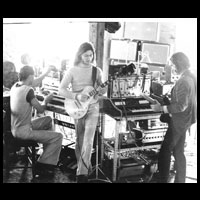 Legendary krautrock pioneers Michael Rother, Dieter Moebius and Hans-Joachim Roedelius –who have played in Kraftwerk, Neu! and Cluster – produced two albums in their three-year existence. This year they released a live album recorded in 1974 and has reunited for a series of shows. They sound as fresh as any work by their krautrock-influenced peers of today. Lengthy motorik grooves that have an enveloping momentum makes it feel like they could, or indeed should, go on forever.