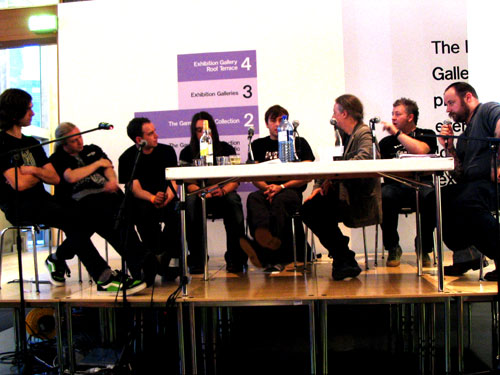 Jim Simpson
Birmingham-based Big Bear, so called after the nickname given to Simpson by legendary DJ, John Peel, runs one of the oldest independent labels in the UK, specialising in jazz, blues and swing artists, although it has also been successfulin other music genres. Jim is the unsung hero of Heavy Metal, he ran the progressive club Henry’s Blueshouse where he inspired Robert Plant, Jon Bonham, Judas Priest and a plethora of others all of whom came see the legendary American Blues artists that Simpson programmed back in the day. He managed Sabbath for their first three albums, including the seminal ‘Black Sabbath’ album, then Paranoid and Master of Reality.
In 1984 Big Bear launched Birmingham’s jazz festival.  Now one of the largest standing arts events in Birmingham.

Edwin Pouncey aka Savage Pencil
Born in Leeds, England 1951. left after 20 years to move to Colchester,
Essex, where he studied graphic design etc at Colchester School Of Art. Four years later he moved to London to attend the Royal College Of Art. Whilst there he started drawing the Rock ‘N’ Roll Zoo strip for Sounds magazine. After graduating from Royal College Edwin spent 7 months in Pennsylvania, USA teaching graphic design at Penn State University.

Mark Titchner
Turner Prize nominee in 2006, Titchners art explores the tensions between the different belief systems that inform society, be they religious, scientific or political. He sites the music of Napalm Death as distinctly influential in his work. Titchner will talk about the appeal of ‘abrasive music’ and describe his interest in how bands, such as Napalm Death, are able to use the voice as an instrument and push the boundaries of language. He sees a vivid resemblance between the style of Napalm Death’s music and what he depicts within his art.

Nicholas Bullen
(b/1968) is a musician and sound artist whose work explores approaches at the extremes of sound. In his twenty-five year history as a musician (as a founder member of Napalm Death – creators of the ‘Grindcore’ genre – and Scorn), he has appeared on numerous recordings and performed extensively across the globe.

He maintains a number of ongoing musical projects including the electronic group Black Galaxy and the Monium label. His work in the field of sound art has included installations, sound design for artists radio, writing on the use of the voice in music and art, a tour of cinemas producing improvised
sound responses to key pieces of ‘experimental’ cinema, and lectures at art galleries including Tate Britain.
www.monium.org.uk

Tony Sylvester
A human encyclopaedia of musical fact and anecdote, currently employed by Southern Records as label manger and head of press. He also co-owns the record label Aurora Borealis, who have been pushing the envelope with challenging sounds from the frayed edges of the underground.
www.aurora-b.com