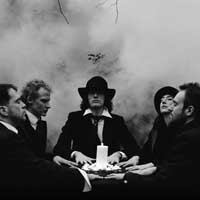 Miasma and The Carousel Of Headless Horses
Featuring members of British band Guapo this instrumental quintet plays dark, antiquated sounding music encompassing elements of Eastern European folk, avant-rock, neo-classical film composition and elements of progressive bands such as Goblin. Their music is exciting and could easily be the soundtrack to an Alejandro Jodorowsky film.
www.myspace.com/headlesshorses