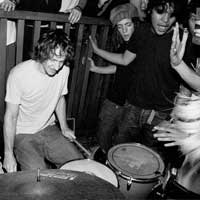 Duracell
Andrew Dymond, is a one-man band from Lyon, France. Initially an artist that only played live with a drum set, a trigger machine, and a synthesizer, Andre said he started Duracell because “he didn’t exactly think about starting a one man band, just the music was there,” and he was heavily influenced by US noise rock act Lightning Bolt.
www.myspace.com/andreduracell