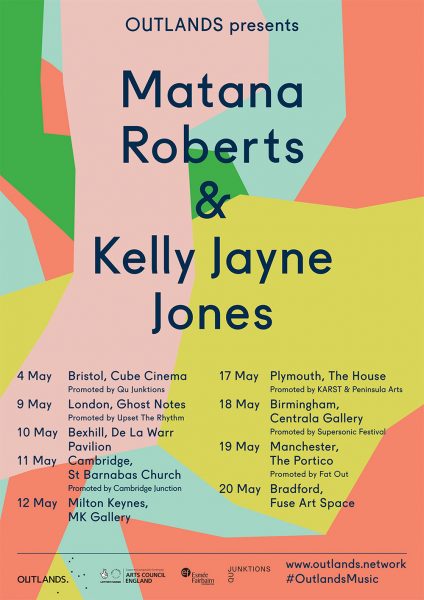 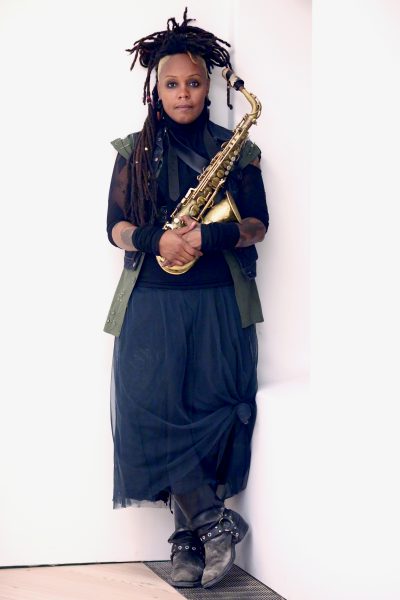 A very special series of sonic episodes bringing together US mixed-media composer/
saxophonist Matana Roberts​ & UK improviser and flautist Kelly Jayne Jones​:
two artists from disparate backgrounds, finding affinity in practices charged by fiercely
personal philosophies on sound and its potential within a patchwork of genre, texture and
meaning. Roberts and Jones will weave their own approaches into live collaborative works
informed by deeply expressive playing, tactile electro-acoustic interplay and a broader
shared politics of resistance/defiance.

Matana Roberts​ is an internationally renowned composer, band leader, saxophonist, sound
experimentalist and mixed-media practitioner. Roberts works in many contexts and mediums,
including improvisation, dance, poetry, and theatre, and has released a diverse body of solo and
ensemble work under her own name on Constellation Records and Central Control over the
past decade. She is perhaps best known for her acclaimed Coin Coin project, a multi-chapter
work of “panoramic sound quilting” that aims to expose the mystical roots and channel the
intuitive spirit-raising traditions of American creative expression while maintaining a deep and
substantive engagement with narrativity, history, community and political expression within
improvisatory musical structures. Constellation began documenting the Coin Coin project in
2011 and has released the first three of a projected twelve album-length chapters to date. 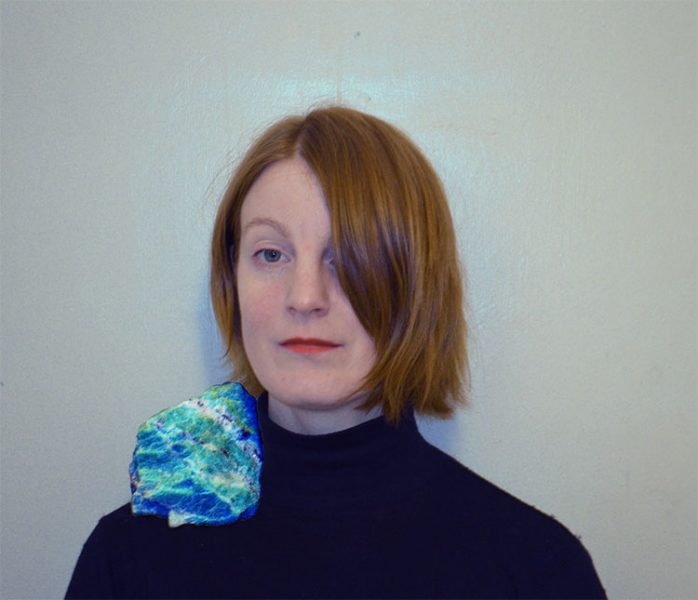 Kelly Jayne Jones ​makes use of varying combinations of prepared recordings, text, rocks,
found sounds and flute. Her work beckons a tussle with uncertainty, inviting exposure and
vulnerability in performance, chasing experiences that open our chasms within, without restraint.
Searching for humble principles of growth; physis; sound, connecting with others in the same
space/moment, customary experimental play, with threads and beads of improvisation and
interactivity. KJJ has had residencies at Arnolfini in Bristol UK and Kunstalle Bergen, Norway,
and has produced commissioned works for Haris Epaminonda at dOCUMENTA13, Tate
Modern, ICA London, Schirn Frankfurt, Point Centre Nicosia. She has performed, solo and with
part wild horses mane on both sides, at CCA Glasgow, Trieze Gallery Paris, Borealis Festival,
Tectonics Reykjavik, Hangar Bicocca in Milan and at Huddersfield Contemporary Music
Festival.

MX WORLD
MX World is the project of South London-based musician Poppy Tibbetts. Her work combines traditional methods and styles of song writing with sampling, sound collage and audio-processing techniques to create atmospheric, experimental pop music, driven by a powerful vocal presence. This sound has been developed further for the MX World EP through sophisticated production techniques, her style branching out into a range of genres including, Industrial, Techno and Field Recording.

SEAN CLANCY
Seán Clancy performs an extended drone-based work for analog synthesizers and projected text throughout the UK in 2018. Through the marriage of continuous focused sound, pithy texts, and defamiliarisation, this work calls attention to the diverse range of journeys that Irish people have undertaken to England, both historically and in more recent times.

(This performance is supported by Culture Ireland)