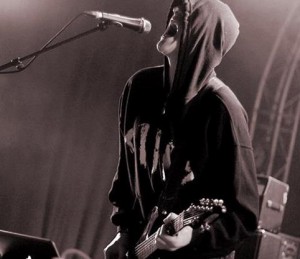 Justin Broadrick will be making his fourth appearance at the Supersonic Festival this year, unveiling his new solo project JK Flesh – a dense, atmospheric endeavour that feels like the culmination of all his previous projects combined. This seems like a fine time to glance back over Broadrick’s long and eclectic career, and celebrate one of Birmingham’s finest musicians in the process…

In 1982, a young Justin would take his first musical steps with his friend Andy Swan under the name Final. The endlessly prolific Broadrick would release no less than 50 Final cassettes within the next year and a half, and would later resurrect the project in order to continue his soundscape experiments.

Two years later, Broadrick would sew the seeds that Godflesh would eventually grow out of with Fall Of Because, alongside future Godflesh cohorts G. Christian Green and Paul Neville. The trio, taking their name from a Killing Joke song, recorded several songs that would go on to become known as Godflesh classics (including ‘Life is Easy’, ‘Devastator, and ‘Merciless’) before calling it a day a few years later, around the same time that Broadrick met fellow Brummie and sonic visionary, Nicholas Bullen…

After a chance meeting at a local flea market, Broadrick would join Bullen and wild eyed drummer Mick Harris in a fledgling anarcho-punk band by the name of Napalm Death. The three-piece refined their sound over the course of three demo tapes, before recording the A-side of seminal grindcore classic ‘Scum’ in 1987 and changing the face of extreme metal forever. Evidently life in the fast lane was not Broadrick’s cup of tea, and he and Bullen left the band before their debut album was completed, feeling that they had pushed this extreme sound as far as it could possibly go (‘You Suffer’ is still credited as being the shortest song in the world by the Guiness Book of Records!).

This lineup would reconvene in 1992 for Scorn’s debut album ‘Vae Solis’, an oft overlooked industrial classic that pits crushing Swans worship against tribal electronic beats – it’s sometimes hard to believe this was the work of the same three musicians responsible for blistering grind outbursts like ‘The Kill’ and ‘Siege of Power’!

Following his departure from Napalm Death (and after a brief stint drumming for industrial pioneers Head Of David), Broadrick reconvened with G.C. Green to form Godflesh. Using their old Fall of Because songs as a starting point, the pair would fuse the hard hitting gut punch of metal with the harsh, mechanical qualities of industrial music, creating another legendary band and redefining a genre in the process. Over the course of 7 full-lengths and numerous EPs, singles and remixes, Godflesh drastically reshaped what many people thought a metal band could sound like, and influenced a plethora of other artists from across the musical spectrum. At the height of their infamy, Broadrick politely turned down offers to join Faith No More and Danzig – one can’t help but wonder how different the musical landscape of the 90’s would have been if he’d accepted…

London based producer Kevin Martin had promoted Godflesh’s first show in the capital city, sparking a long lasting friendship between the pair. Justin eventually contributed to Kevin’s band God, and in 1991, they released their first record under the moniker Techno Animal, a startling concoction of industrial, hip-hop, dub and noise that still sounds fresh to this day. Broadrick and Martin would go on to collaborate many more times over the next few years, and even invited Atari Teenage Riot’s Alec Empire to help them out with the manic breakcore of their Curse of the Golden Vampire project.

Godflesh eventually imploded shortly after releasing their 2000 swansong ‘Hymns’ (featuring ex-Swans sticksman Ted Parsons in place of the drum machine that had provided the bleak, mechanical pulse for previous records), but out of their ashes rose Broadrick’s new project, Jesu. Over the course of four full-lengths and numerous EPs and splits, Justin would forge a more ethereal, optimistic sound that has more in common with the shoegaze movement than it does the harsh industrial feel of his earlier works.

Broadrick crossed paths with Aaron Turner when Jesu toured with Isis, and the two joined forces with occasional Jesu cohort Diarmuid Dalton and ex-Head of David bassist David Cochrane to create Greymachine, a stark, rhythmic juggernaut amidst wastelands of barren noise that almost sounded like Godflesh being re-imagined by Whitehouse. Greymachine would only release a single eponymous album, but the record still stands as one of the heaviest and most uncompromising monoliths in both Broadrick and Turner’s back catalogues.

‘Posthuman’ is Justin’s first official solo album, and it feels like a comprehensive combination of all the different sounds and styles he’s previously worked with, fusing together to form one imposing industrial behemoth that doesn’t really sound like anything else being produced in 2012. The cathartic blend of dubstep, industrial, metal and noise could be seen in some ways as a spiritual successor to the Greymachine album, but the project casts quite a distinct shadow over Broadrick’s extensive back catalogue.Where he goes from here is anyone’s guess…

Of course, this is only the most basic overview of Justin’s long and storied career; there are many of his projects we’ve left out here, such as the harsh power electronics of White Static Demon, the twisted breakcore of Krackhead and the vast, Throbbing Gristle-meets-King Tubby soundscapes of Council Estate Electronics. And this is all before we’ve even mentioned his recent venture into the great unknown as Valley Of Fear (alongside Skullflower’s Matthew Bower and Samantha Davies), and of course, the feverishly rumoured and much anticipated Godflesh comeback record…

With all these projects on the go simultaneously, it’s a wonder Justin finds the time to play live at all, making it all the more special when he does. It’s a real pleasure to have this visionary artist bringing his latest project to Supersonic this year, and promises to be an experience that no self-respecting Broadrick fan is going to want to miss.