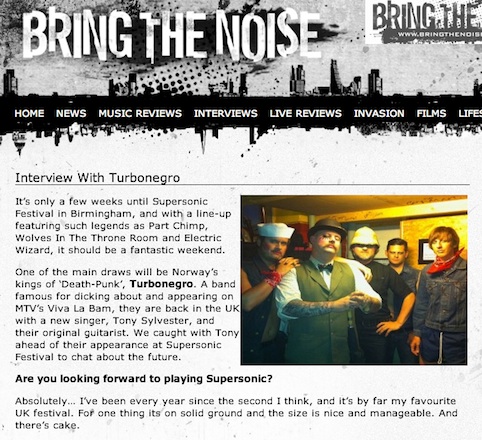 Turbonegro interview with Bring The Noise

Get the lowdown from new vocalist Tony Sylvester on what to expect from Turbonegro’s exclusive Supersonic show. 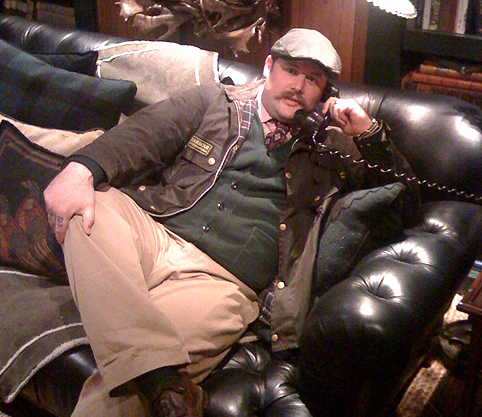 We’ve asked a number of Supersonic regulars to tell us what they’re most looking forward to seeing this year, Tony Sylvester recommends…

EAGLE TWIN
I’m ecstatic to see the Salt Lake City duo finally making their UK debut. Having trawled over to the continent at the beginning of the year to witness them live, I can safely say disappointment is not an option. I’ve been a fan of Gentry Densley’s guitar playing since the early 90s with the unconquerable Iceburn, and here the stripped back, loose approach really fires up his downtuned ferocity. And I could watch Tyler drum all night.

MOTHLITE
What would Supersonic be without an appearance from Daniel O’Sullivan? Along with O’Malley, he’s probably graced its stages more times than anyone else, except PCM of course! This year we find his newest, and my favourite of all the groups he’s been involved with – Mothlite. Shot through with a classic British literate pop sensibility, Mothlite updates the template while glimpsing back at the likes of the 4AD roster, New Order, Talk Talk and David Sylvian. The latest recordings are staggering and I can’t want to hear them full spectrum, as it were.

HALLOGALLO
Previous Supersonic highlights for me (at least that haven’t involved me disrobing and getting wet) have always included the wild card inclusions of the unexpected reformations – Harmonia and Goblin being the two obvious candidates. The prospect of hearing songs that I’ve lived inside and around for half my life is making me giddy with anticipation. Bring on the Motorik!

VBS VICE GUIDE TO LIBERIA
A rare opportunity to see Andy Capper’s life threatening journey into the dark heart of West Africa.. Never fails to blow me away that the fellow actually put himself through this to bring back this film as tender as it is savage. Killer soundtrack to boot.

FROZEN LOVE DJ Sets
What can I say? Cheeky I know! But I’m carting up the gems from my soul and R&B 45s so we can all hear them over the PA and dance into the wee hours.. See you all there, people!