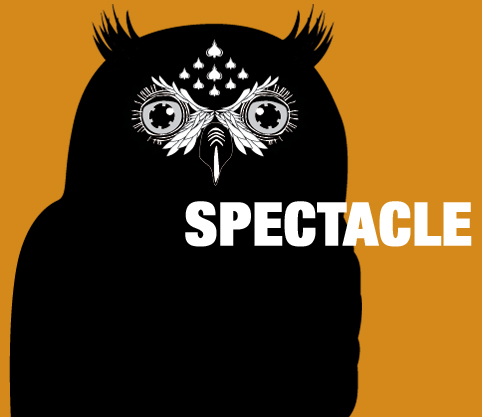 
Supersonic invited six artists to create illustrations in response to this year’s theme of ‘Spectacle’. The term was borrowed from the Roman practice of staging circuses, in the famous “Bread and Circuses” philosophy of the Roman elite to maintain civil order without solving underlying social and economic problems.

Like the festival itself, ‘Spectacle’ operates in two contexts simultaneously. On the one hand, it refers to high culture performances where the draw for an audience is the impressive visual accomplishment. On the other hand, it refers to low cultural shows operating in a folk environment.

Chris Bourke
An artist and printmaker from Worcester, he spent over a quarter of his life owning and running a skateboard shop. He now makes art full time. His work is influenced by music, politics, nature, skateboarding, tattoos, life and death.

Craig Earp
Earp likes drawing strange bony twisted shapes with teeth, an obsession of his since watching John Carpenter’s The Thing and Alien when he was a schoolboy.  His digital art mostly combines photo montage and illustrations together into what he calls ‘Organic Disturbances’; scenes of nature in its decay, its death, brought together to form an outlandish beauty.

Harriet ‘Alana’ Shephard
As a teenager, Harriet frequently trekked into Birmingham to see various Capsule shows; droning guitars, sirening feedback and enough bass to make your jeans shake, always left her feeling spellbound; a euphoria that has continually fed into her work. Since moving to the Big Smoke, embarking on the epic quest of doing an illustration degree at Camberwell, Harriet began skateboarding; now an important aspect of her practice as an illustrator. In between drawing Heavy Metal legends and comics about mis-adventures with famous skateboarders. Harriet also runs Brash, a skate zine, which features the combination of artwork, interviews, reviews and comic strips, now in its third issue.

Jake Blanchard
A freelance illustrator born and raised in the Peak District, the countryside is a huge influence on Blanchard’s work today. He has worked on a variety of different projects including record sleeves, gig posters, skateboards, t-shirts and newspapers and has exhibited throughout the UK as well as in Paris, Copenhagen, Boston and Waiheke Island (New Zealand). He also runs his own record label and publishing company, Tor Press.

Sophia Alda
Since graduating from Brighton University in 2009, Sophia Alda has undertaken a variety of jobs, large and small, and exhibited widely, most recently in Leeds, Edinburgh and London. She works primarily in gouache, with a vibrant, acerbic style, and produces apparel, books and prints. She also works as a restorative decorator, where her most exciting project to date involved gilding a lion’s face.

Thomas J Hughes
Horror films of the 1970s, Marvel comic books, traditional doom metal, twentieth century science fiction television serials and Yes album covers are just a few of the things that inspire Thomas in the making of his work. His work is created using a variety of materials, with an emphasis on hand-drawn illustration and typography.