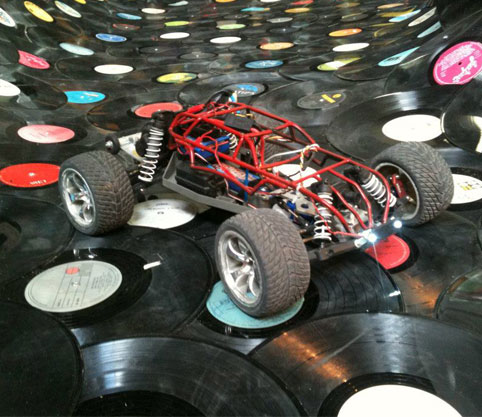 As arelative newbie to noise music, I decided that the easiest route to ‘enlightenment’ that I could take would be through the relationship between music and visual art. One thing that is at the top of my anticipatory list this year is the Vinyl Rally, an installation by Australian artist Justice Yeldham. Justice, AKA Lucas Abela, initially classed himself as a Turntablist with early attempts ranging between stabbing vinyl with Kruger-esque stylus gloves to performing deaf defying duets duels with amplified Samurai swords. Perhaps some of you may be more familiar with his performance work- a breathtaking combination of sound and visuals, whereby he uses a piece of glass to curate an exhibition of cacophonous sound. The performance is not for the faint hearted- Justice eats, smashes and crunches the glass and it is safe to assume that he will probably undertake his show barefoot.

With the Vinyl Rally having previously travelled the Seven Seas and now finally landing in the UK, Supersonic festival-goers are in for a treat. A treat that is sure to tempt the senses into new realms through noise, visuals and most importantly, direct participation. You become the one in control, guiding the car around the track with the attached stylus scratching against the vinyls themselves creating a noise sequence that will never be created again.

In a world where computer games are taking over, what is so refreshing about the Vinyl Rally is that the player is not separated from their game by a lack of reality; you are part of the game itself. Justice Yeldham has chosen to reference old school Arcade games in his choice of seating, controls and general conception, transporting the player down memory lane, perhaps back to childhood. For me, perhaps the most exciting thing about the installation is the chance to quite literally sit back in the driver’s seat, away from the reality of the road and into the imaginary world of the Rally. Make sure not to miss out on tickets for Supersonic 2012 if you are wanting to catch any part of Justice Yeldham’s work.

Why not have a listen?

To find out more about this year’s line-up, read more here. 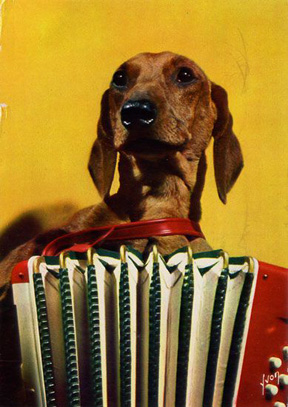 Happy new year all, 2012 will be a very special year for Supersonic Festival in that we’ll be celebrating our 10th birthday, we want to make sure it’s a really memorable occasion. Some of you may remember our blog post calling for suggestions to be made for Supersonic 2011, well now is your chance to let us know who you’d like to see perform at Supersonic 2012. You never know your dream just may come true – after all many of you asked for Corrupted in 2009 , Godflesh for 2010 and Electric Wizard last year and so they came! Think big and have your say, we look forward to hearing your suggestions. Maybe you can top our dream of Lionel Richie and Mike Patton singing a duet of ‘Easy’. We can but dream.