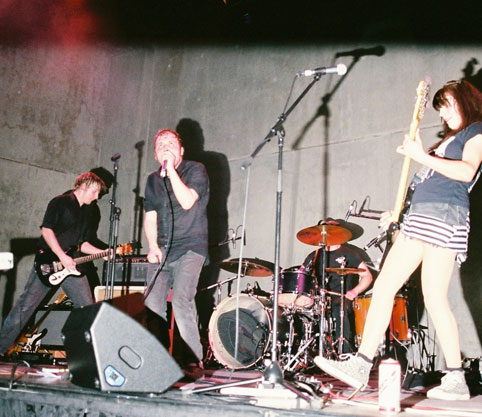 Nottingham’s Grey Hairs have been causing quite a racket of late with their raucous, grungy rock’n’roll, leading some critics to describe them as sounding like “Pissed Jeans ripping off Status Quo!” Featuring ex-members of Skull Tanker, Harvey Half Devoured and Nervebomb, the band have paid their dues on the live circuit and are currently gearing up to put out their debut release. We caught up with vocalist James Finlay to find out what they’re looking forward to at this year’s festival…

Supersonic – Could you tell us briefly about how Grey Hairs came into being?

James Finlay – Grey Hairs came into being through just having lots of stuff in common. We all live really close to each other. We go to the same shows; we watch each others bands, we like having beers together and we’re all the same sort of age so it just kind of made sense for us to try and turn that common ground in to some sort of document of this part of our lives.

Why should Supersonic attendees check out your set?
Supersonic is as much about new discovery as it is about watching stuff that you already know. I only know about 50% of the acts on the line-up this year but that’s what’s so exciting about the festival. You know that there’s going to be a load of totally mental, uncompromising, underground music that you never knew you loved until it’s melting your face off. I’d like to encourage the attendees this year to embrace Supersonic’s spirit of adventure and allow us the chance to hopefully melt your face off. We’ll be treading the boards at the Old Library at approximately 10pm on Sunday.

If time, money and space were no object, what would you do with your performance?
I’ve always wanted to try out some crazy quadraphonic sound system stuff with noise coming at the crowd from all around so that you feel kind of wrapped up in the chaos of the music. Other than that probably just sensible stuff like buying a gym membership and using it so I don’t feel like puking 15 minutes into our set.

Who else are you looking forward to seeing at the festival this year?
I’m really looking forward to catching up with my old friend John who I haven’t seen since Supersonic last year (another plus of the festival: catching up with old friends). Musically: Goat, Drunk in Hell, Hey Colossus, Hookworms, Oxbow, Merzbow, Dylan Carlson, The Bug, loads of stuff. I’m praying that we don’t clash with any of it.

Who would be the ideal artist for you to collaborate with at Supersonic 2012?
The Bug.

If you were curating Supersonic, which three artists would you most want to have on board?
I’d love to see Naked City era John Zorn, Lungfish, Pissed Jeans…I could go on.

Which items would you say are essential for festival survival?
For Supersonic, a hotel! I almost slept in the back of a white van last year with our drummer just outside The Paragon. It wasn’t an especially exciting prospect for two, middle aged men. Thankfully we managed to sort something out.  Money and Alka Seltzer of course. Fuck earplugs. Actually maybe bring earplugs.

Finally, what does the future have in store for Grey Hairs?
We’ve just finished recording this week and plan to have the fruits of that session out on 7” through Gringo Records hopefully in time for Christmas. We’ve also got plans for a couple of split 7s early in the New Year and I expect we’ll be traversing the M1 quite a lot over the coming months for live shows too.