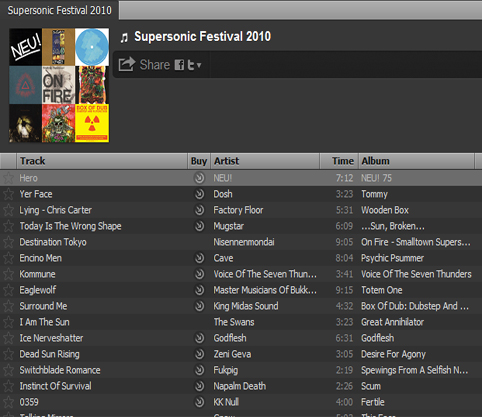 Morning.  We’re trying to get you in the habit of checking back here regularly for new music; a little over two weeks ago we launched the Supersonic Last.fm radio channel, yesterday the Brum Cast Podcast and today the Supersonic Spotify playlist.  (Click here.. Supersonic Festival 2010)
I’ve noticed that there’s been quite a few links posted on Facebook recently but, we’ve been neglecting our blog a little.  While those of you not on Facebook might not have a whole website full of pictures of you looking undignified, you’ve been missing out on some pretty awesome videos.
So, here’s the Youtube footage, and a little bit about some of the bands in the playlist::
FACTORY FLOOR
Factory Floor are the latest good band to come out of East London.  They play using vintage analogue equipment to create abrasive electronic music, layered in feedback, with obligatory Ian Curtis post-punk vocals.  They’re all the best bits of Sonic Youth and Throbbing Gristle, with Giorgio Moroder disco electronics and Kraftwerk beats, an inspired combination.
LICHENS
Lichens is scarily busy: he was the bassist and vocalist in 90 Day Men, has collaborated with the pretty brilliant Explosions in the Sky, Om and TV on the Radio and, amid all the band hopping, has released two of his own LP’s.  It shares a lo-fi mesmeric charm with bands like Grouper; it’s simple and uncomplicated but, difficult to describe in a trite 100 word paragraph.  It’s best if you just watch the video below.  It’s really brilliant!
NISENNENMONDAI
Nisennenmondai are a three-piece party band taking cues from the likes of NEU!, Hella, This Heat and The Pop Group.  At times it’s also kind of reminiscent of ESG and Liquid Liquid too, treading the line between playful, energised dance music and 20th century minimalism and krautrock.  If you managed to catch them at Supersonic last year, you will know that live, they blow most other bands away.
MELT BANANA
Melt Banana have been in our good books ever since they released “Squeak Squeak Creak” back in 1994 and kind of redefined hardcore punk with their psychotic discordant jazzcore speed metal. The ‘groove’ created by the frenzy of drumming and chaotic oscillations is relentless and impossibly energetic.
KING MIDAS SOUND
Kevin Martin (otherwise known as The Bug), poet Roger Robinson and singer Kiki Hitomi are King Midas Sound.  Their debut LP “Waiting for You” was released on Kode9’s label-du-jour Hyperdub, and combines Tricky, Mezzanine-era Massive Attack and the more desolate corners of Burial to create a sound with a grounding in dub and dancehall.
SHARE: