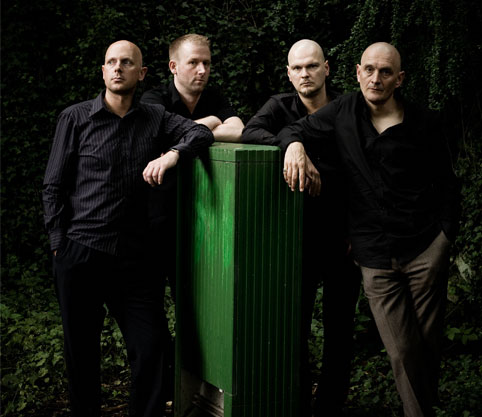 It’s an honour and a total privilege to be able to witness the breath taking Bohren & der Club of Gore at this year’s Supersonic. The self-styled “doom jazz” masters haven’t graced these shores since 2008 and there’s no guarantee they’ll be returning anytime soon, so fans of their elegant, captivating sound are understandably freaking out right now. If you’ve yet to become acquainted with this stunning four piece, then allow us to introduce you to your new favourite band…

On ‘Gore Motel’, the band’s debut, the Club of Gore adhered to a more traditional rock structure of guitar, bass and drums (oh, and mellotron, naturally), and this startling album comes across like a jazzy Earth, juxtaposing ominous downtuned dirges with subtle jazz flourishes. The band would mine similar territory with their 1995 double album, ‘Midnight Radio’, before embarking on an even darker, jazzier direction…

Losing a guitarist can be a crippling blow for many lesser bands, but after six-stringer Reiner Henseleit had bowed out, the Club of Gore recruited the inimitable talents of saxophonist Christoph Clöser and delivered one of their greatest records, the stunningly beautiful ‘Sunset Mission’. A richly atmospheric journey through dark city streets, this was film noir jazz at it’s most gripping, slowly enveloping the listener in it’s sumptuous soundscapes and smoky, late night ambience. The word ‘masterpiece’ is oft abused in this day and age but this is one record that truly deserves such an accolade; mandatory listening for both jazz and ambient fans!

After the stunning ‘Sunset Mission’, the Club of Gore were clearly on a roll, and delivered their break-through album ‘Black Earth’ just two years later. After catching the attention of musical maverick Mike Patton, ‘Black Earth’ was reissued on his Ipecac record label, bringing the beautiful sounds of Bohren & der Club of Gore to a much wider audience. Musically, ‘Black Earth’ shares many similarities with ‘Sunset Mission’, but pushes the material in an even darker direction; this is a progression, rather than a sequel.

If 2005’s ‘Geisterfaust’ had hinted at a more ambient manifestation of the Club of Gore, ‘Dolores’ was where the band wholeheartedly embraced the minimalist ideals they had toyed with all along. Evidently this move paid off, with the quartet managing to evoke a vibrant cornucopia of emotions with some of their starkest music to date. This was Bohren’s sound reduced down to it’s bare skeleton, allowing the sombre and beautiful core of their music to ring out between the sparse, isolated notes, and it was no less gripping for it!

Never a band to conform to expectations, their last album ‘Beileid’ saw the Club of Gore recruiting the vocal talents of Mike Patton for an utterly bizarre yet strangely beautiful cover of the German hair metal band Warlock’s ‘Catch My Heart’, mutating the song into a melancholy jazz ballad and stretching the notes out to dwell in the spaces inbetween. ‘Beileid’ may be Bohren’s shortest record, but it packs no less of a punch, as the band continue to expand their sound and subtly branch out into new territory. Where they progress from here is anyone’s guess, but it’s going to be a pleasure finding out!