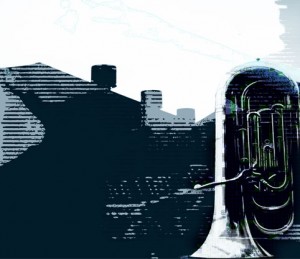 There are several exclusive, once-in-a-lifetime collaborative performances taking place at this year’s Supersonic, ranging from Lash Frenzy’s all-star noise ensemble to KK Null’s performance with local tuba-drone pioneers ORE, and of course, the pairing of several string, woodwind and brass musicians with Eugene S. Robinson and Niko Wenner for the much anticipated Oxbow Orchestra. There must be something about the adventurous atmosphere of Supersonic, as the festival has a long history of inspiring musicians to step out of their comfort zones and join forces with one another to contribute something truly special to the festival. Indeed, these one-off spectacles and collaborations are part of what makes the festival so unique, and have provided avid concert goers with a veritable smörgåsbord of cherished memories over the years. Here are just a few of the highlights – which one was your favourite?

Last year’s edition of the festival saw Swedish avant-jazz trio Fire! team up with Australia’s finest purveyor of drones (and frequent Sunn O))) collaborator) Oren Ambarchi, for an enthralling set that touched on noise, jazz, and musique concrète with the kind of subtle elegance and deft textural sensibility we’ve come to expand from these fine musicians. Evidently these guys enjoyed the performance as much as the audience did, as Fire! recruited Ambarchi once again for their third album,  ‘In The Mouth – A Hand’, which was released last year.

When these two noise titans clashed together two years ago, the results were akin to a nuclear bomb detonation, obliterating all in its path (it’s rumoured that there are still children being born in Digbeth with tinnitus to this very day). Holding the honour of being one of Supersonic’s loudest ever performances (and, as those who have attended the festival before will attest, this is certainly no small feat!), the Library was packed to the rafters for this one-off show, with a lengthy queue of dedicated noise addicts stretching around the block. Be sure to get there early for this year’s special performances to avoid listening from outside!

The pairing of two of Japan’s most extreme musical exports was never going to make for easy listening, but nothing could have prepared us for the deafening onslaught produced by these masters of their respective crafts. Masami Akita’s torrential outbursts of static and rich, layered walls of feedback provided the perfect counterpoint to Haino’s chilling, ethereal wail and guitar mangling histrionics, resulting in an eclectic and vibrant set that’s often spoken of in hushed tones by Supersonic veterans.

When Oxbow’s Eugene & Niko performed at the festival 5 years ago, they brought along an all-star ensemble (featuring Godflesh/Jesu mastermind Justin Broadrick, Sunn O)))’s Stephen O’Malley and ex-Head Of David bassist David Cochrane) for an unforgettable and thrillingly intimate set, never to be repeated again (but fear not – Oxbow will be returning this year with a small orchestra in tow, and Justin Broadrick will also be putting in an appearance with his new JK Flesh project).

The performance was captured on tape and released on wax as part of Capsule’s limited edition vinyl series. Unfortunately all 1000 copies are long sold out, but there are still a number of great releases available, chronicling Supersonic sets from the likes of Harvey Milk, Tweak Bird and Iron Lung – the perfect way to relive those Supersonic memories and keep your excitement under control during the wait for this year’s edition!