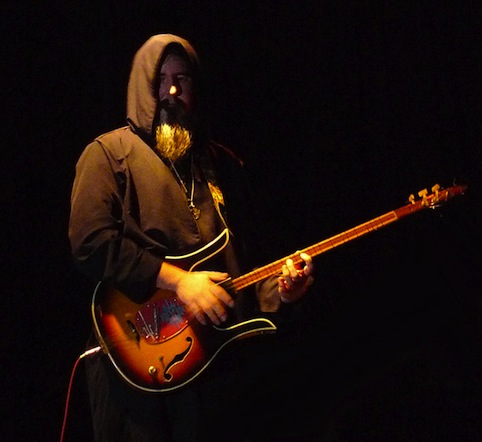 Now this is a tricky one.  Secret Chiefs 3 have posted a sampler of their new 7″, a record they hope to have for sale at their Supersonic show.  Except it’s not by Secret Chiefs 3.  Though it might be.  Kind of.  What are we talking about?

It seems to go like this:  Secret Chiefs 3 was started by former Mr Bungle man Trey Spruance (him above) in the mid 90s.  They seemingly play everything from surf rock to death metal to Persian funk.  But again, they sort of don’t.  What is clear is that Spruance creates a new branch from the Secret Chiefs t(h)ree every time he gets an urge to go in a particular direction.  Which brings us back to this new 7″  – it’s actually a split 7″ between Ishraqiyun and FORMS and you can listen right here.  ‘Split’ seems to a good word for this whole project.  And what does it sound like?  There’s no way we can do a better description job that the band themselves:

“An unassuming but brilliant piece by Bernard Hermann was hidden in the background during the 1951 film The Day the Earth Stood Still. Originally just piano, vibes and timpani, “Radar” now gets exploded into an uncalled-for over-exposure, via the world’s only fully organic, wood & spirit mechanized orchestra, FORMS.”

Secret Chiefs 3 were founded by guitar and sax player Trey Spruance and are based out of the San Francisco Bay Area. Their music styles vary throughout their albums with their performance of surf rock, Persian, death metal, and other various styles – the only thing unifying the diverse range of styles they play is how precisely and accurately they play them.
Some of the members were also key members of Mr. Bungle.