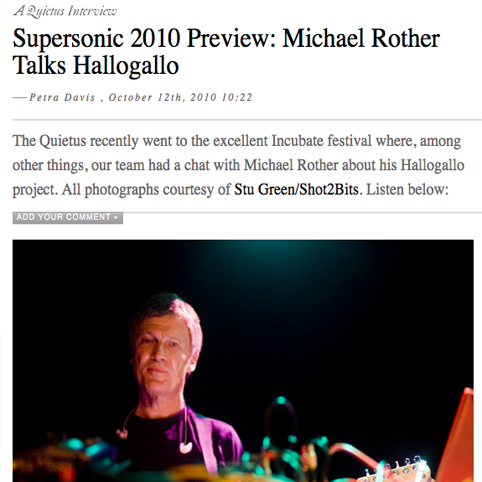 The Quietus went and chatted to Michael Rother about Hallogallo

Michael Rother’s pedigree as a Krautrock pioneer is close to unparalleled, with a roster including Kraftwerk, Neu!, and more recently, Harmonia, his project with Cluster’s Hans Joachim Roedelius and Dieter Moebius. But it is his work with the much-missed motorik innovator Klaus Dinger for which he is best known. Latest project Hallogallo was originally intended as a reunion of sorts with Dinger, before the drummer’s tragic death in 2008. Now Rother is making his first appearances in years, with Hallogallo 2010 – consisting of Rother, the majestic Steve Shelley of Sonic Youth on drums, and bassist Aaron Mullan of the Tall Firs.

Michael Rother speaks about the formation and inspiration behind the incredible music of NEU! in this great documentary “Krautrock: The rebirth of Germany”. He will  performing live at this years SUPERSONIC FESTIVAL, Birmingham as HALLOGALLO 2010 with Steve Shelley (Sonic Youth) & Aaron Mullan (Tall Firs) on SUNDAY 24th October.
Tickets can be purchased from: 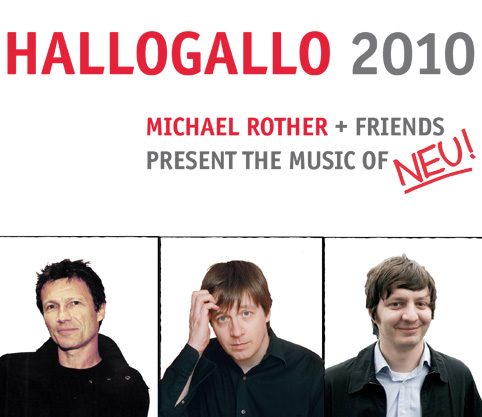