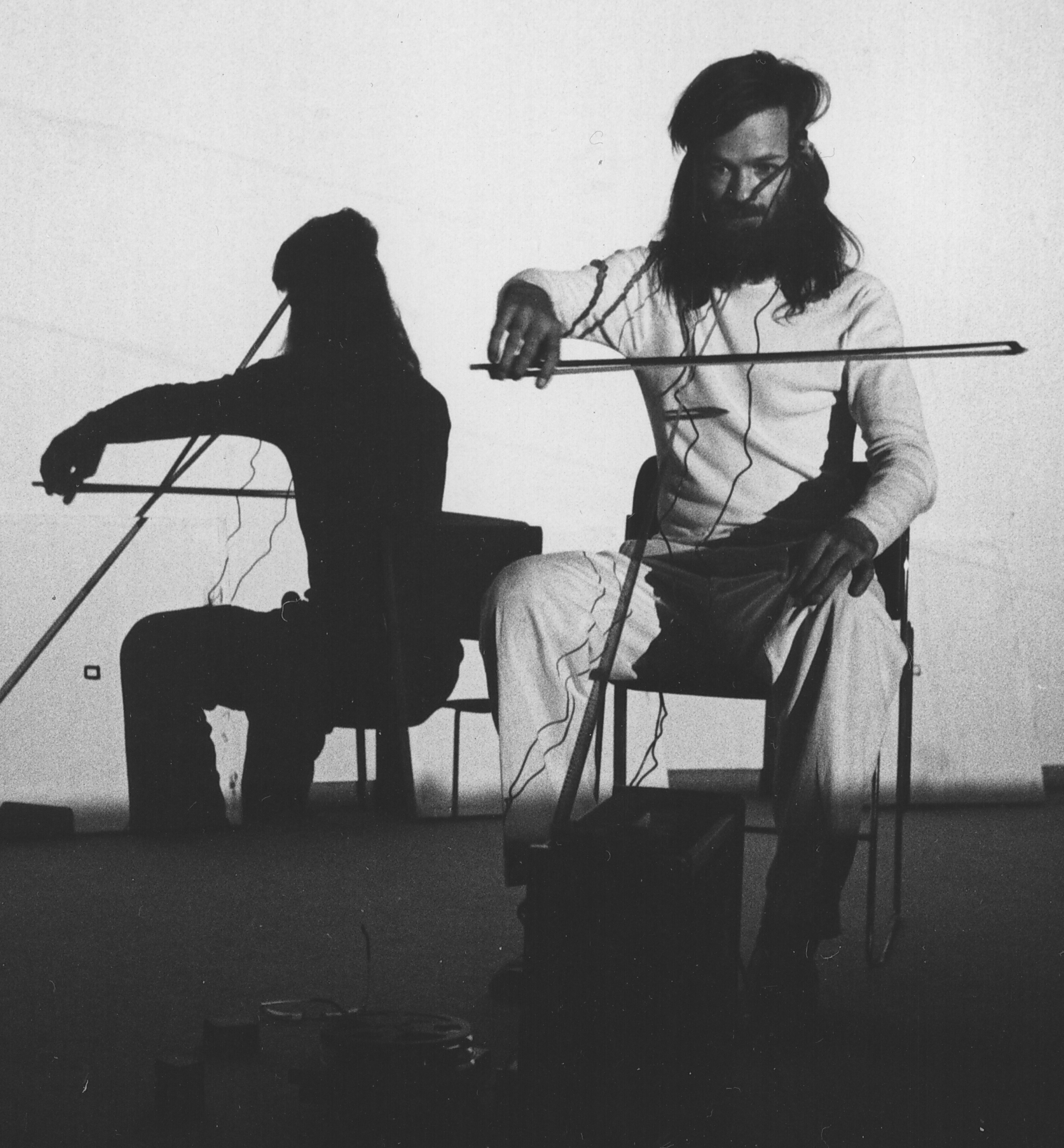 JUNE HAS ARRIVED! SUPERSONIC BEGINS IN A MERE TWO WEEKS! And guess what? We have EVEN MORE delectable offerings heading your way. Check out our film screenings…

TONY CONRAD: COMPLETELY IN THE PRESENT

Since the early 1960s, Conrad’s films and compositions have been the stuff of legend for artists and musicians everywhere. His vast, inter-disciplinary repertoire has single-handedly created and influenced major film and compositional movements. He performed in and recorded the soundtrack to Jack Smith’s legendary Flaming Creatures; he turned the paradigms of cinema upside down with The Flicker, a film composed of only black and white frames; his development and practice of Just Intonation and Minimalism through his work with Stockhausen and La Monte Young still has the music establishment scratching their heads; his pivotal role in the formation of The Velvet Underground has directly or indirectly influenced everyone who has picked up a guitar since; as an early adopter of activist public access television he democratised the emerging medium of portable video.

THE COLOSSUS OF DESTINY: A MELVINS TALE – FILM

“I always thought it was strange that people didn’t know more about The Melvins and I felt their story needed to be told. The band members had told me that a few people had talked the talk but had never followed up on their threats to make a film about them, so a little over two years ago things really fell into place and now the end product is finished for all to see, ” explained Director and Co-Producer Bob Hannam, who worked in tandem with co-producer Ryan Sutherby to bring the film to fruition. “It has been a long labor of love for the both of us and we are excited for people to see the film and understand the workings of a truly great band.”

“The Colossus of Destiny: A Melvins Tale” follows the band’s history, with rare behind-the-scenes footage from their early days in Washington to their multiple modern incarnations with an eye on the enduring influence they’ve had throughout their 30-year plus history. The documentary features interviews with Mike Patton, Chris Cornell, Jello Biafra, Gene Simmons, Krist Novoselic, Mark Arm, J. Mascis, Josh Homme, David Yow and many more. 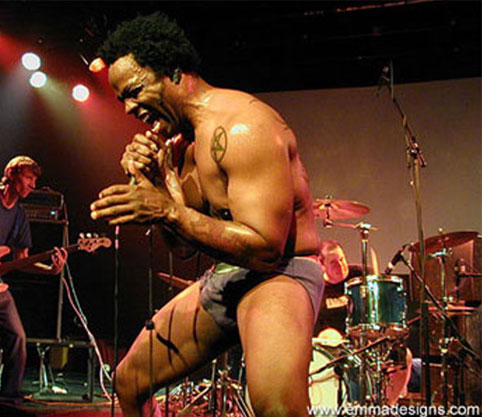 Oxbow fans have much to rejoice over at this year’s festival; in addition to their extremely special Oxbow Orchestra set and frontman Eugene S. Robinson’s appearance in our ‘You Can Be You’ panel discussion, Supersonic will also be screening ‘The Luxury Of Empire’, an enthralling and stylish glimpse at life on the road for one of the most polarising and unrestrained avant-rock bands to walk the Earth. A gripping, warts-and-all portrait of a band maturing whilst having to deal with the trials and tribulations of the touring process, the film features candid interviews and live footage, all wrapped up in a deliciously dark and cinematic aesthetic, informed by Oxbow’s music itself as much as it is by film making convention. The themes of coming-of-age and the difficulties of touring are sure to fascinate anyone with even the remotest interest in live music, but for Oxbow enthusiasts especially, this is mandatory viewing.

‘The Luxury of Empire’ is the work of French film-maker Mariexxme, a former animator who has also filmed the Melvins, Sleep, the Jesus Lizard, Lightning Bolt and Jello Biafra, to name but a few. We asked Marie a few questions about the film, and why it should be an essential part of your Supersonic experience…

Supersonic: What was it about Oxbow that inspired you to make them the focal point of your film?
Marie: It was the 20th anniversary of Oxbow the year I decided to make that film focused on them. A year before that I had interviewed them for a French magazine with a friend of mine and edited a 40 minute video based on the history of the band, which we cut in 4 parts and posted online. That video made me want to go further, 40 minutes of something more! It made me really want to enter their life and make them talk about themselves and their approach to art. That’s why I focused the film more on their way of seeing art and their work.

Also, I’d heard that they were looking for somebody to make a film about ‘The Narcotic Story’, which for me is one of the most brilliant albums of the last few years and one of the reasons I wanted everybody to know about Oxbow! I couldn’t work on a film like that by myself but that’s the reason why my documentary has been filmed in the dark, I wanted it to look like a movie, I wanted it to look like ‘The Narcotic Story’.

‘The Luxury of Empire’ was partially funded by a Kickstarter campaign. Would you recommend this way of funding to other aspiring artists?
I’d never heard about Kickstarter before ‘The Luxury of Empire’, I think it was Niko Wenner who told me about it. At first I thought it was crazy and would never work, but it’s been a nice surprise! Since then I’ve seen lots of other projects reaching their goals, I myself pledged on 2 different projects involving my friend David Yow (The Jesus Lizard), I must admit it works perfectly well. Yes I would definitely recommend it to others, and maybe even use this way myself next time if needed.

Why should Supersonic attendees check out ‘The Luxury of Empire’?
Why? Because I think people coming to a festival like Supersonic are passionate and curious people. Because this film is about one of the most brilliant bands existing and one of the most unrecognized (this film was made for Oxbow’s fans but also, and this is really important to me, for others to discover). Because this film is about Oxbow but more than a film about one band, it’s a film talking about what makes an artist live. Something I got myself inside like anybody involved in any kind of Art, something you could never live without, something that makes you play or paint, write or sing everyday and until the end of your life – whatever happened, even if you know you ‘ll never get rich by this, even if it means doing the same things everyday and living hard times most of the time.

‘The Luxury of Empire’ shows the inside, what the audience and fans never see, the reality of being an artist, the reality of being on tour, it also includes uncut live performances because it’s important to see the result of the process. It has been made to go with a whole live show filmed in Paris at the same time, my idea was to make a film to explain the inside and one to show the result without talking anymore, like Darkness and Light. It has been planed like that and it’s on the DVD like that with Manuel Libeskind’s tour diary about Oxbow ‘Still Before’ as a wonderful bonus.

Who else are you looking forward to seeing at the festival this year?
Zeni Geva, I haven’t seen them for years, Ufommammut (they are friends of mine), and then Grey Hairs, Dope Body, Bohren und der Club of Gore, Jarboe, Goat, Body /Head, Mothertrucker. But I will have to film Oxbow’s Orchestra experience and rehearsal during the week too, I’m waiting to see the schedules to organize my weekend at the festival.

You’ve filmed a great number of awesome bands, but are there any left that you would like to work with?
I’ve started working with Amenra and I’m really happy about this, they’re one of the bands I really wanted to make a film about. I would have loved working with Sleepytime Gorilla Museum, I talked about it but unfortunately they don’t exist anymore. Melvins are second, I really want to work with them. All those bands have their own unique world and that’s what I’m looking for.

I would have loved making a film about Alice Donut but it’s already been done. I must admit I’ve filmed a lot of bands, and since I’ve started working on small video interviews for the Canadian/French website Pelecanus, I’ve been making a short film about a band every month! I just finished one about Converge and will start one for Wovenhand. I had to film Baroness in July but had technical troubles with my camera, so I definitely have to do something with them again soon! I also did Sleep, I must say I’m overjoyed!

If you were curating Supersonic, which three artists would you most want to have on board?
Maybe Amenra, Oxbow and the Melvins, but I could easily find 10 bands I’d most want…..

Which items would you say are essential for festival survival?
For me : a camera, a pair of confortable shoes and a pint. That’s it!

‘The Luxury Of Empire’ will be screening at this year’s Supersonic Festival. For more information about Mariexxme, you can visit her official website and Vimeo page. 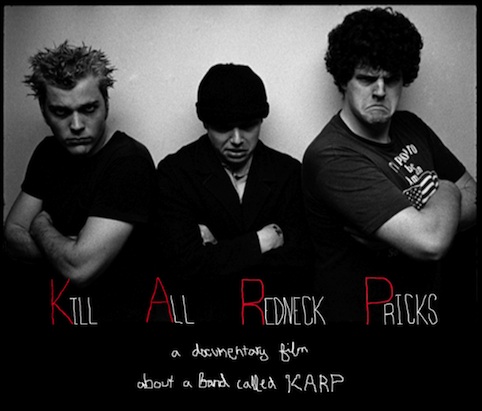 All this week at Supersonic we’re going to be previewing this year’s fantastic film programme.  Day 1 is the turn of ‘KARP LIVES! 1990-1998’.

This film is a biography of a friendship. Set in the indie rock utopia of an evergreen forested Olympia Washington of the early 90’s, this film chronicles the journey of the love of three friends from childhood to adulthood over a span of 20 years. Nestled in the mythology of bands such as Beat Happening, Bikini Kill, Unwound, and the Melvins, the story of KARP is the story of a childhood love forced to make adult changes in order to survive an adult world and how the choices we face as we follow our dreams affect those whom we love most. It is the story of how so often the thing that frees you can become your largest obstacle.

This is how a forum poster recalls it:
“Karp played a show in my living room in Columbus, Ohio in 1995 or 1996 (the years start to blend together). We had held dozens and dozens of shows there with no real incident. These were loud and sometimes crazy shows. When Karp played the police came. With all of the doors and windows closed you could still hear it blacks and blocks away. One of the loudest bands i have ever seen and i mean that as a high compliment. I am quite excited to see this.”

Don’t forget too that bassist Jared Warren will be playing in The Melvins at their Capsule-promoted show at the Institute on 1st November. 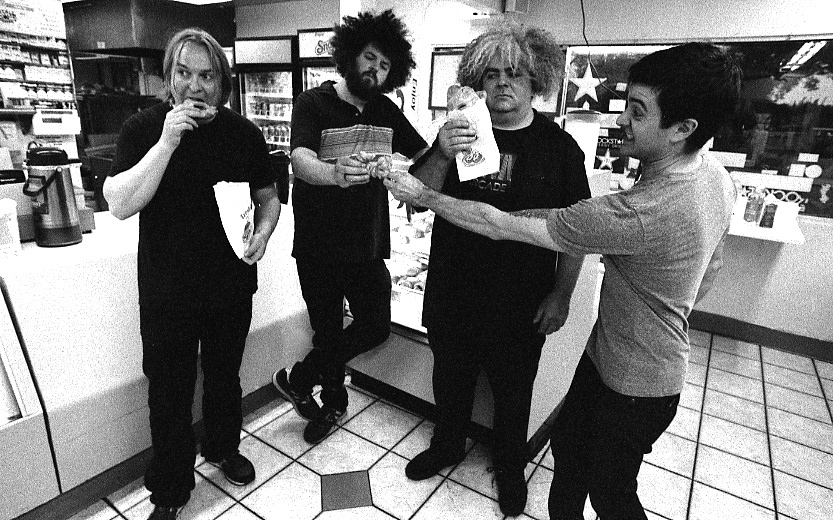 We’re going a bit mental here at Capsule HQ listening to The Melvins live album, which is pretty apt, since we’re like PUTTING ON THE MELVINS! Yep, that’s right, 1st November 2011 (a post Supersonic party?) at HMV Institute, we’ll be dancing raucously, and maybe having a cry.

JOIN US by buying tickets from here or here

Capsule; the gift that keeps on giving…;)