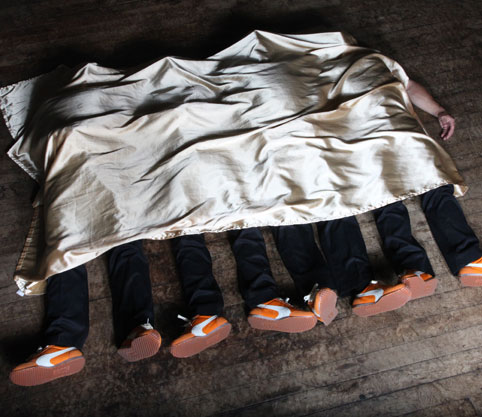 Doomsday Student are another exciting addition to this years lineup, and are sure to find favour with fans of other acts on the bill this year like Zeni Geva, Dope Body and Drunk In Hell.

Doomsday Student are in many ways a logical continuation of the seminal Providence noise rock band Arab on Radar. For the uninitiated, Arab on Radar’s sound was a thrilling whirlwind of abrasive, trebly guitars, harrowingly repetitive distorted bass lines, brutally primitive rhythms and nasal shrieks, a winning combination that influenced pretty much every noise rock band to follow in their wake. Doomsday Student comprises the bulk of Arab on Radar’s personnel (plus members of another post-Arab on Radar project, Chinese Stars) and as such share some similar qualities, but these musicians are keen to distinguish Doomsday Student as a distinct entity in its own right, stating that –

“You know who these men are. They have been other men. Who they were before does not matter. What matters most is who they are now. These men, with two menacing guitars, violent drums, and wild words will fill that void in you. They will build bunkers out of your bones. They will make weapons out of your teeth. They will drink your tears and feed on your meat.”

Evidently, Doomsday Student mean business, and will stop at nothing to eviscerate your eardrums with their pummelling noise rock. We contacted the band to find out more about what they have in store for us at this year’s festival, and which other bands they’re looking forward to seeing…

Supersonic: Why should Supersonic attendees check out your set?
Doomsday Student: Doomsday Student features 3/4  of Arab On Radar, 3/4 of Chinese Stars, and half of Athletic Automaton. All founders of and contributors to the now Near-Mythic Providence R.I. No-Wave/Noise scene. Our reputation precedes us.

Could you tell us briefly about how Doomsday Student came into being?
The band was born out of confusion and obsession. It’s a delicate topic. I would suggest rereading answer #1.

If time, money and space were no object, what would you do with your performance?
We wouldn’t do anything different.

If you were curating Supersonic, which three artists would you most want to have on board?
We would want Sightings, Ed Schrader’s Music Beat, and Lightning Bolt. But we would also take the opportunity to beg Lake Of Dracula, US Maple, and Harry Pussy to get back together and play.

Which items would you say are essential for festival survival?
A great location and great bands.

Finally, what does the future have in store for Doomsday Student?
We’ve already begun writing our second record. So, we will probably finish writing it and record it in early spring.