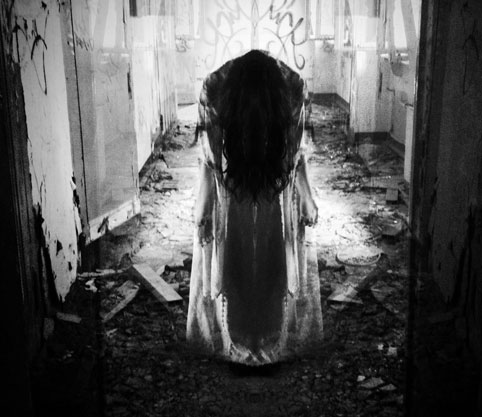 We have a real audio-visual treat in store for you this year; a screening of Belgian artist Shazzula Nebula‘s experimental film ‘Black Mass Rising’, a mystical lo-fi experience examining occult and apocalyptic themes through a dark procession of creepy, faintly psychedelic visuals. As you would expect from an ex-member of bands like Aqua Nebula Oscillator and White Hills, Shazzula has put just as much time and effort into the film’s soundtrack as she has its visual aesthetic, with a soundtrack consisting of exclusive tracks from the likes of Master Musicians Of Bukkake, Sylvester Anfang II, Burial Hex, Kinit Her, Cultus Sabbati, Aluk Todolo, Menace Ruine and many, many more. We got in touch with Shazzula to find out more about this extraordinary film, and why she’s just as excited to bring it to Supersonic as we are to screen it!

Supersonic: What inspired you to create ‘Black Mass Rising’?
Shazzula: In terms of cinema…

Other things that inspired me:

The ‘Pre-Raphaelism’ Art movement, the dark side of things and of course MUSIC.

Why should Supersonic attendees check out the film?
Well… if they like those movies… and if they like the bands on the soundtrack… They really should get into it… It would be an opportunity to hear in one project all those great bands, all finally united. Like a Sound & Visual Communion!

The list of contributing artists reads like a fairly comprehensive list of contemporary avant-garde/ esoteric musicians. How did you get all these bands involved in the project?
I love them all, they all are unique and they are indirectly related! For some of them, I was in contact or they are friends or we met…

When the idea of the movie first came to my mind, I did not want to do the whole soundtrack myself (I’m not really into “me myself and I”…). I thought it would be great to get all these music lovers in one crazy D.I.Y project!

I never thought the movie will have success or anything, I just wanted to do it and believe in it 100%, and I was so glad they all accepted to follow the Dark Path To The Light !

If time, money and space were no object, what would you have done differently with the film?
Well… I never wanted to have money for this project… it was from A to Z all improvised on my travels with friends & yes: The baby was born after 9 months…

The next movie project is heavier, it will be filmed in Mongolia.

Who else are you looking forward to seeing at the festival this year?
1- Dylan Carlson project with Teta Colamonaco on Vocals !
2- Six Organs Of Admittance
3- Sir Richard Bishop
4- Goat
5- Lichens /Robert Aiki Aubrey Lowe
6- Gnod
7- Merzbow

If you were curating Supersonic, which three artists would you most want to have on board?
So many!!

Which items would you say are essential for festival survival?
Unfortunately : Earplugs!

A Camera & bunch of  filters.

Finally, what does the future have in store for Shazzula?
Limited 300 Copies LP reissue of RUTH WHITE “Flowers Of Evil” on Our label, BLACK MASS RISING.

A tape of SAYONA on Brave Mysteries.

For more information about Shazzula Nebula, you can visit her official website and the Black Mass Rising Society page.