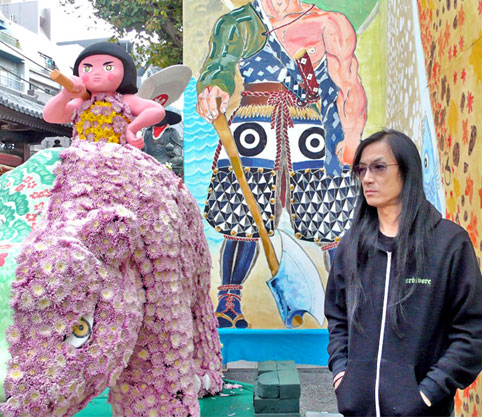 Noise fans are in for a treat this year, with several extremely prominent noise artists gearing up for a full-on audio assault that will shake the very foundations of Birmingham’s Custard Factory and push the limits of what you quaintly consider to be ‘music’. So without further ado, allow me to introduce you to the individuals who’ll be doing their utmost to blow your mind and perforate your eardrums this year…

Masami Akita, the undisputed king of squealing feedback and the most recognisable name in noise, will be gracing us with his infamously abrasive and intricately layered sounds. This isn’t the first time Akita has played at the festival (veterans will recall his threateningly loud collaborative set with Keiji Haino back in 2008), but this time round he has the entire stage to himself. We’re not entirely sure what Masami is planning, but given his vast back catalogue of skull shatteringly brutal noise, it’s probably best to pack your earplugs if you want to stand a chance of hearing the rest of the festival afterwards…

KK Null’s highly distinctive and dynamic brand of noise has made him a firm favourite amongst fans of the genre, and his enthusiasm for furthering his own musical output through collaboration has seen him progress through a variety of different sounds. Following on from the sensory bombardment of his set with Lash Frenzy back in 2010, KK Null will be performing with inventive tuba-drone pioneers ORE; if you’ve ever wondered how the deep tones of a tuba would sound resonating across acres of white noise, now’s your time to find out!

Kevin Drumm is the great unsung hero of modern noise. After mastering his own style of sparse, prepared guitar tweaking minimalism, Drumm began to experiment with dense, abrasive soundscapes and rose up to become heralded as one of noise’s most prodigious sons. His 2002 album ‘Sheer Hellish Miasma’ is considered a classic of the genre, a bold and devastating collage of powerful sounds and terrifying aural outbursts that certainly lives up to its name. Drumm hasn’t played in the UK since his European tour with Prurient back in 2008, and his Supersonic set will be the only British show of his current tour, making this an unmissable chance for noise fans to watch a true master at work.

Supersonic isn’t the only entity to be celebrating its tenth anniversary this year – noise provocateur Lash Frenzy (AKA Andrew Moscardo-Parker) will be celebrating a decade of existence with ‘Ver Heroicus Sublimis’, an unscripted performance that represents the culmination of all his previous works. Andrew has been quite secretive about what exactly ‘Ver Heroicus Sublimis’ is going to entail, but backed by an all-star noise ensemble that includes members of Anaal Nathrakh, Beestung Lips, Benediction, Sally and Einstellung, this performance promises to be an all-out sonic massacre that will leave you crippled and broken. Bring it on!

Anders Hana (Moha!, Ultralyd & Noxagt), Leon Barnett (Horacio Pollard, Neigh%Music) and Kjetil Bransdal are Clifford Torus, a power trio as reimagined by the warped mind of a distraught acid casualty in a psychiatric ward. Their confrontational, highly textural and utterly deranged noise chews up elements of free jazz, power electronics, drone and sludge, before spitting them out and sculpting the subsequent mess into an imposing and unsettling kaleidoscope of noise. Despite being relative newcomers, Clifford Torus are definitely a force to be reckoned with, and fans of loud, harsh and unpredictable music should make these guys a major priority on their festival schedule!