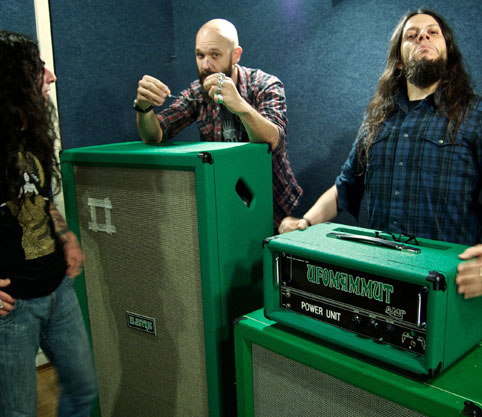 We’re thrilled to announce that Ufomammut will be playing all of their new magnum opus ‘ORO’ at Supersonic this year! Birmingham is the perfect place for this spiritually charged metal odyssey to take place, not just because of its gritty, post-industrial aesthetic; the city is unquestionably where the screeching, fanged foetus of heavy metal was violently ejected from the cosmic womb and let loose to terrorize the world at large. Despite what some journalists will tell you, the exact moment when this happened is easily identifiable and can be pin-pointed when Tony Iommi first summoned that planet-obliteratingly evil chord that opens Black Sabbath’s infamous titular song. The streets and factories of Birmingham did more than act as the genre’s birthplace, as the industrial environment that Geezer Butler, Tony Iommi, Ozzy Osbourne and Bill Ward grew up in played a pivotal role in influencing the bleak and terrifying sound that epitomised the genre’s early classics. It’s hard to imagine ‘Electric Funeral’ coming out of anywhere but the turbulent mechanical landscape of Birmingham circa 1970, as metal’s most important 4 piece allowed themselves to vent away the pent-up depression brought on by menial factory jobs, against the backdrop of the most ominous riffs in existence -“dying world of radiation, victims of mad frustration” indeed.

As part of Capsule’s Home Of Metal initiative, we’re proud to present the Crossroads of Sabbath walking tour this year, an in-depth look at the city that changed the face of music forever led by music historian and Sabbath enthusiast Rob Horrocks. It’s heartening to know the world is still populated by a healthy number of Sabbath devotees as the tour is completely over-subscribed and is now fully booked! But don’t worry if you missed out on tickets as Supersonic has more than enough riff related goodness for you this year, with a couple of bands cut from the same recognisable lineage that Sabbath themselves prompted all those years ago.

First up is the hugely influential guitarist Dylan Carlson. His band Earth (which, incidentally, is what Bill, Geezer, Ozzy & Tony referred to themselves as in their early blues-rock incarnation) are perhaps the most extreme manifestation of Sabbathian lore to rear its head thus far. Records like ‘Earth 2’ and ‘Phase 3: Thrones & Dominions’ took gargantuan Sabbath style riffs and reduced them to a crawl, producing a long, resonant drone that enraptured many across the globe (not least two youngsters named Anderson and O’Malley). This special set finds Dylan distancing himself somewhat from his Earth colleagues, and branching out with a new set of musicians. Dylan’s solo work has been shrouded in secrecy so far, but it would not be entirely unfounded to expect a continuation of the mystical, folky direction Carlson has pursued on the last two Earth records, the ‘Angels Of Darkness, Demons Of Light’ duology. However, Dylan could well have a trick or two up his sleeve, making this an essential experience for Earth fans!

Italy’s finest space-doom trio Ufomammut are making the pilgrimage to Supersonic this year, riding a wave of inspiration off the back of their recent two-part album ‘ORO’. Despite sharing traits with many of their amp laden, doom saying peers, Ufomammut’s style is very unique and distinctive, with a rich psychedelic aura and a visceral, gut-punching intensity. If you replaced Electric Wizard’s weed stash and horror movie collection with several grams of peyote and a copy of Pink Floyd’s ‘Meddle’, the ensuing voyage would seem like a pleasing parallel to the path Ufomammut have carved out for themselves. In the two years that have passed since their humongous modern day classic ‘Eve’, the band have returned from the wilderness like psychedelic visionaries, armed with the two records that comprise ‘ORO’, ‘Opus: Primum’ and ‘Opus: Alter’. A dense and imposing body of work, the ‘ORO’ saga is more than the sum of its parts, and Ufomammut have a real treat in store for us this year. In addition to this exclusive sneak peek at their new video, the band has just revealed that they’ll be playing ‘ORO’ in its entirety at the festival, offering an ecstatic voyage into a vast, deep space riff utopia that will consume and unravel the very fibre of your being. And what self-respecting Sabbath fan wouldn’t want that? 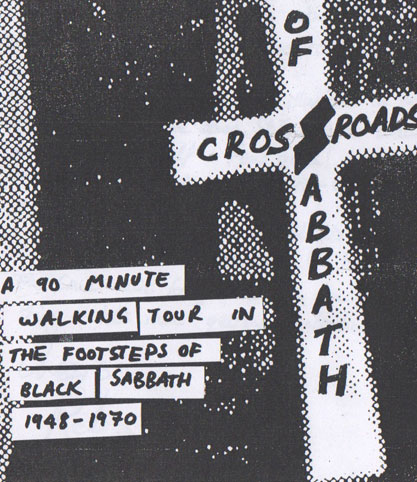 Sign up for a free, guided tour of Black Sabbath’s early environment by music historian Rob Horrocks. Rob was our lead researcher for our Home of Metal project. Read more about him and the walking tour HERE

This special event will take place on Saturday 20th October and is free to all Supersonic weekend ticket holders, but booking is essential as spaces are limited. To do so, email [email protected] with ‘Crossroads of Sabbath’ as the subject title.

“I was never a metal-er at school. Around the age of 14 (1986) when musical identity lines were drawn I was into punk and new wave. I would argue endlessly with my metal head friends over the merits of 1000 note a minute guitar solos, poodle hair and spandex versus the emotional rawness, honesty and relative poppy simplicity of the stuff that John Peel played. I was increasingly out numbered  – Iron Maiden went straight in at number one and Echo & The Bunnymen split up. The outcome of those endless discussions is that I got to know how the whole metal scene fits together. I know my Venom from my Poison.

20 years later I came to an appreciation of Black Sabbath through a band I was working with. Einstellung love Sabbath and many of their colossal riffs are dropped tuned.  Soon I too came to appreciate Ozzy era Black Sabbath. That’s an understatement. I have grown to love those first albums.

I read Record Collector magazine, The Quietus blog and occasionally The Sunday Times.”

This special event will take place on Saturday 20th October and is free to all Supersonic weekend ticket holders, but booking is essential. To do so, email [email protected] with ‘Crossroads of Sabbath’ as the subject title. 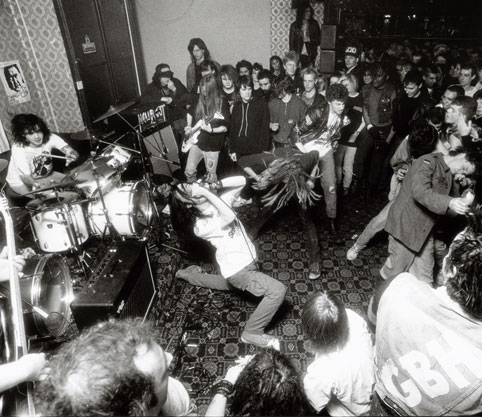 If you think the Capsule ladies sit around twiddling their thumbs between Supersonics, think again! 2011 has been an incredible year for our most ambitious project to date with exhibitions, live events and a conference all celebrating Birmingham and the Black Country as the birthplace of Heavy Metal. The project is ongoing and you can contribute to the Home of Metal digital archive and learn more here www.homeofmetal.com

Impassioned by the social conditions of the time and inspired by anarcho-punk bands who were taking an anti-capitalist stance through their music, Nicholas Bullen and Miles ‘Rat’ Ratledge formed Napalm Death. At only 14 years old, they were motivated to play gigs, create fanzines, and swap music via cassette tapes with the wider punk community. This exhibition will give you an exciting insight into this period of music history – the formation of Grindcore.

No strangers to Supersonic, here are Napalm Death performing at the fest in 2010:

We’re delighted to let you know that we’ve been nominated for an AIM Indie Champion award, for our work with Home Of Metal and Supersonic Festival.

We’re up against some pretty outstanding folks including our goods friends John & Luke at The Quietus ( but do feel free to vote for us !)- more details here http://www.musicindie.com/awards/indiechampion 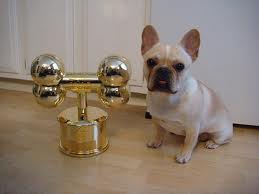 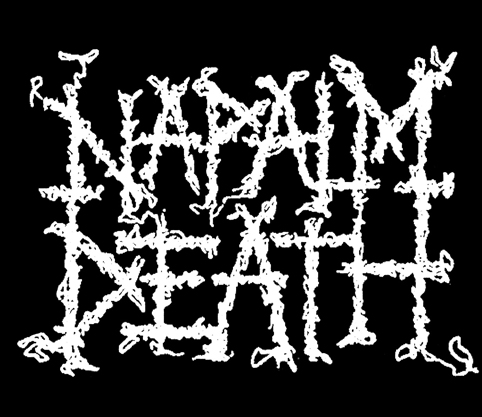 Home Of Metal: Sirens Of Sparkhill
4.45PM SATURDAY I THEATRE
Kerrang! DJ Johnny Doom will be hosting a special roundtable chat with past and present members of Napalm Death – so if you ever wanted to hear about the formative years of the world’s premier grindcore band, or if you just want to discover exactly what the bloody hell a swinging thumbjump is, you’d be advised to set time aside to catch this one-off discussion.

As part of our Home Of Metal project

Welcome to Capsule zine no. 5, this edition has been designed by our brand new intern Tom J Hughes, a mighty fine illustrator who has done us proud. As ever you’ll find some info about all things Capsule, as well as Supersonic Festival news and how it feels to be a quiz show champion. We’ve got some great pieces from local illustrators and a spot of colouring in too plus another great cake recipe. Enjoy!

We’re always looking for submissions, so feel free to get in touch via admin[at]capsule.org.uk with your articles, rants and doodles.