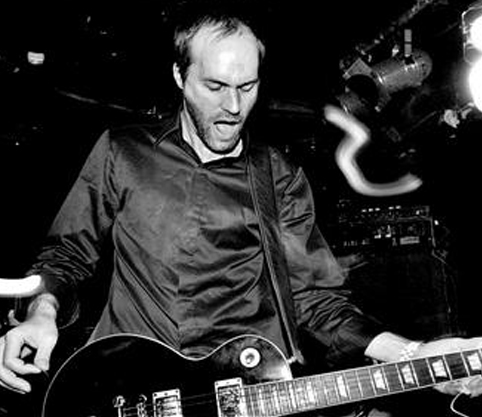 Oxbow is a band that should need no introduction; their bold and uncompromising penchant for experimentation has placed them at the forefront of contemporary rock and resulted in a startling sound that no self-respecting music enthusiast can ignore. This year marks the beginning of yet another new chapter in Oxbow’s long and storied history, with vocalist Eugene S. Robinson and and guitarist Niko Wenner teaming up to play Niko’s arrangements and orchestrations with a variety of classically trained string and brass players as the Oxbow Orchestra, news that has sent ripples of excitement through the Oxbow fanbase worldwide. Niko managed to take some time out of his busy schedule to give us a little more insight into how this idea originated, what we can expect from their upcoming album, and some potential collaborative performances at this year’s festival, both scheduled and impromptu…

Supersonic: What can we expect from your set this year?

Niko: It’s a rare and great thing. I’m very pleased that Supersonic has again made it possible for us to make explicit aspects of Oxbow music that, live, are often only implicit. OXBOW ORCHESTRA will bring to the stage new music yet to be recorded, live premieres of recording arrangements, and special music created just for this event.

Our recordings begin our songs. Our live performance solution to the music on our recordings – mass-persona, mass-musical/sound information – is often simply “volume.” To sound like twenty guitars playing at once, turn up the one. Unlike our band gigs, Oxbow recordings have always exploited the performance of larger groups. From the Kecak-inspired chanting and clapping by a Symphony of a Thousand on the recording of “Daughter,” to the massed overdubbed guitars of “Pannonica.” From the string quartet and multi-tracked guitars and rock-band of “Bomb,” to the Hammond B-3 organ, male choir, piano, guitars, et al., in the musique concrète texture of “Acker Sound/Read All Over.” The live-in-the-studio nine piece drone orchestra of “Shine (Glimmer).” The scored string quartet plus woodwind quintet of “Mr. Johnson,” and adding rock band to that nonet:  “Frank’s Frolic.” The aim has always been for an orchestral texture.

Our next studio album ‘The Thin Black Duke’ will feature brass in addition to strings, which suggested the OXBOW ORCHESTRA live line-up. I’ve wanted for some time to bring my friend from Paris-based band Heliogable (and bandmate in Bellflower) guitarist Philippe Thiphaine into an Oxbow performance. Oxbow has by tradition always made a new set minutes before we begin to play. The opportunity offered with the Orchestra is too special to leave quite that much to chance. A great deal of care has gone to arranging and orchestrating music both new and old for this special format of strings, brass, and additional guitar.

There should be surprises for all.

How did the idea for the Oxbow Orchestra originate?
Being asked to perform at Supersonic’s ten year anniversary is an honor. Dan and Greg can’t be here unfortunately. So my desire to create a performance that would arrive at the same transcendent place that Oxbow aims for, but through different means, drove some soul searching. The solution: A chamber music version of Oxbow songs new and old. And from this OXBOW ORCHESTRA was born.

Who else are you looking forward to seeing at the festival this year?
Merzbow; ORE and KK NULL; Ruins Alone; Sir Richard Bishop… I’m excited for everything. Everything I already know and knowing that things I don’t already know will be great too.

If you could pick any artist on the lineup this year to collaborate with, who would it be?
One? Merzbow. And, we have indeed arranged a last-minute collaboration.

If you were curating Supersonic, which three artists would you most want to have on board?
György Ligeti is dead now sadly. Of those still living:

1. Ornette Coleman.  Because I realized twenty years ago when pondering who – if I somehow could –  I would time-travel to experience performing that he’s one. And he’s still performing now!

2. Mathew Shipp.  Because he makes music that is like directly listening to a brain at play and at work, without the filter of “language” (à la cognitive scientist Steven Pinker).

3. Elliot Carter.  For his music of course but also so that I could shake his hand. I was too shy to do so when standing next to him in an empty foyer during a break in a performance of his first four string quartets in San Francisco. Not incidentally, a life-changing concert for me.

Which items would you say are essential for festival survival?
A curious audience, daring artists, and the support to join the two.

How would you sum up Supersonic festival in five words?
One, two, three, four GO!

Finally, what does the future have in store for Oxbow?
Quite soberly and sincerely, I feel like we are stronger than ever and in mastery of our strengths, in ways I’d barely dared to hope we could achieve when we started. Truthfully, these are partly benefits of simply “not giving up,” tenacity, irascibility, not anything special. In any case IF we can continue, stay alive long enough, inch Allah and gods willing I think the future looks good.

Specifically, our next full length record ‘The Thin Black Duke’.

The Oxbow Orchestra will be performing at Supersonic Festival on Sunday 21st October.