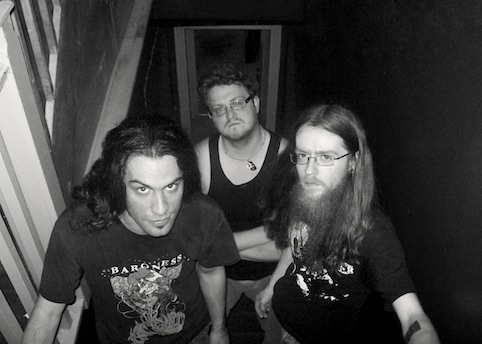 The eighth in our series of Supersonic Q&As, introducing you to the artists playing in 2011 and giving you an insight into their world.  Today, hailing from London, a little known treasure named Slabdragger.  A band who sing about epic quests to Nepal to find killer weed, rubbish Roman Centurions, battling huge Octopian creatures and drinking rum.  They also feature the one and only Sam Thredder (Dead Swans, More Than Life, Last Witness, Throats).  And, as their label Holy Roar says, they’re sludge as.  Answers courtesy of bass player Yusuf Tary.

1. Which five words describe what you know about Supersonic?
THIS IS SOME HEAVY SHIT.

2. What can people expect of Slabdragger at the festival?
A lot of massive, driving, noisy riffs that your mum would not like very much.

3. Why make music – what does it do for you that nothing else does?
It takes away the pressures of the ‘life competition’ that we all seem to be involved in. Music seems to be the one thing in our existence that is not (or shouldn’t) be competitive because everything else seems to be. People are generally so wrapped up in what their job title is, how much money they’re earning, what car they have blah blah blah. Our music, for us, transcends all that….. and we get to shout a lot.

4. Who else on the bill are you hoping to see?  (And why?)
I for one am looking forward to Electric Wizard as I’ve seen them before and they were amazing. I would also like to see Zombi as they have a real interesting sound.

5. Finally, your essential ‘surviving-Supersonic’ items are…
It’s probably going to be fucking freezing in Birmingham so warm clothes and lots and lots of BEER.