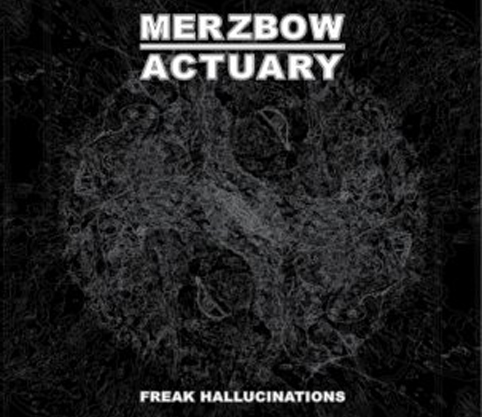 Japan’s noise master Merzbow is one of the most insanely prolific artists alive today. Indeed, some times it can seem overwhelming trying to keep up to date (this year has seen the release of 2 mammoth 10 disc boxsets, ‘Merzphysics’ and ‘Merzmorphosis’) but this new split release with the equally fascinating Actuary should be high on your list of records to check out. But don’t just take our word for it, here’s a great review of it from Grind to Death’s Alex Layzell –

As we have come to expect from Merzbow, the music (and I use the term loosely) is not designed with the express idea of belonging to any specific form or to appease the listener, it’s purely a complete experiment in pushing the boundaries of mankind’s command of sound and as such appeals to those of inquisitive mind sets for whom satisfaction is not derived directly from the listening, but in the attempt to unravel its inner workings and abstract meanings of this enigma of digital manipulation. Ultimately it is an endless task with no conclusion, yet a realisation that fails to shake the determination of the listener from repeating the process in the hopes of being that one step closer to the answer. Such is the beauty of Merzbow.

You can read the full review over at Grind to Death and catch Merzbow on Saturday 20th October at Supersonic. Merzbow fans will also want to check out fellow noise-mongers KK Null, Kevin Drumm and Lash Frenzy at this year’s festival!