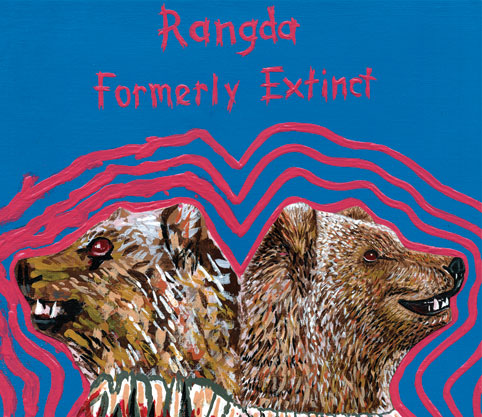 The much anticipated second record by superfreak group Rangda comes our way 18th September 2012. Made up of Ben Chasny (Six Organs of Admittance), Sir Richard Bishop (Sun City Girls) and Chris (thousands of Free Jazz credits) Corsano, they’re a sight and sound to behold live. You can catch Rangda and their various guises at Supersonic Festival this year for an extended freak out.

For the second flight of the shadowy witch-god brothers, Rangda have changed their status from False Flag to Formerly Extinct! Upon examination, there’s reason beyond their rhyme-free wanderings. Since the last album, see, Rangda have been all
around this world as the wise men and the fools alike in lands both high and low. They’ve seen the young and invest-less kneel amp-side, waiting for musical succor, then in the next town over they’ve felt the cold chill of being left for dead and seen their music dubbed “so wrong it must be Rangda” strictly for some local pen-lifter’s personal chuckles.
How we can even claim that Formerly Extinct displays a greater fluidity than the well-oiled zero-to-60Khz hairpins of False Flag is a matter of
debate around DC corporate HQ. It seems to depend on how you define the semi-metallic element of sound sometimes called “sharp.” False Flag featured a tune called “Serrated Edges,” which made sense in the knife-flying arc of that album. Sharp is a claw-like quality in generous supply on Formerly Extinct as well — a graphic picture in sharp focus, perhaps with cleaner edges yet unmistakably gruesome subjects. While False Flag found these slingers in a whirlwinded shred-fest, each trying to out do each other with what they brought to the Rangda lair (er, recording studio), Formerly Extinct blossoms like the home-grown hybrid of a three-headed beast well-practiced in its body. A lean ’n’ amazingly mean, greased-up, child-eating machine. Drag City