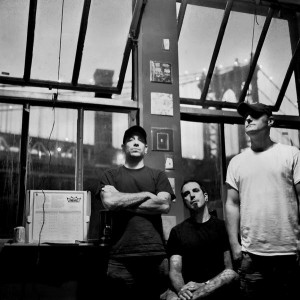 New York City’s Unsane assisted in pioneering a more aggressive, less studied version of noise rock, one that blended the scum/art industrial sturm und drang of Foetus, the Swans, Einsturzende Neubauten, and Sonic Youth with the decidedly more straightforward hardcore idiom favored by acts like Sick of It All. As a power trio, Unsane relied upon a hammering, power-press rhythm section, a searing Telecaster howl, and distorted vocals that resembled nothing if not the sound of a man trapped in the New York Subway system .

March 20th 2012 sees the band’s 7th full length ‘Wreck’ out on Alternative Tentacles Records. For over two decades they have represented a harsh, aggressive, honest, and intelligent voice of New York’s Lower East Side.

Big Business started as a two piece band composed of Jared Warren of Karp and The Tight Bros From Way Back When, and Coady Willis of Murder City Devils. Their sound has been characterized as a bombastic and frantic low end attack, marked by Warren’s signature vocal delivery. The band released its first album, “Head for the Shallow”, on January 25, 2005.

In late 2006, after relocating to Los Angeles, Jared and Coady both became members of The Melvins, first appearing on “(A) Senile Animal”.

Tickets are £10 advance and available from https://www.theticketsellers.co.uk/