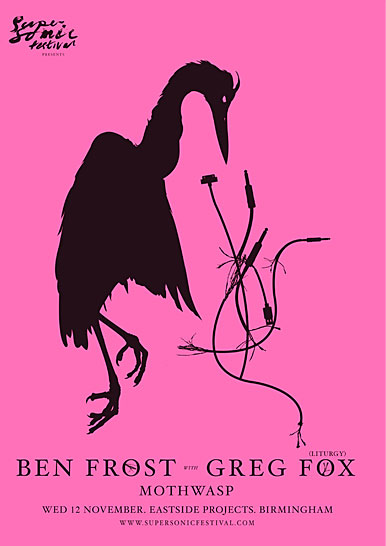 On Wednesday 12 of Nov we are delighted to present a very special performance which will take place at Eastside Projects – Ben Frost will be joined by Greg Fox (Liturgy) on drums. Capacity is limited so we recommend advance tickets from our friends Milque and Muhle based at the Custard Factory or via theticketsellers.

Born in 1980 in Melbourne, Australia, Ben Frost relocated to Reykjavík Iceland in 2005 and working together with close friends Valgeir Sigurðsson and Nico Muhly, formed the Bedroom Community record label/collective.

In 2010 he was chosen by Brian Eno as part of the Rolex Mentor and Protegé program for a year of collaboration, one of the outcomes of which was Sólaris; a re-scoring of the Tarkovsky classic for Poland’s Sinfonietta Cracovia. Eno and Frost continue to work together on a range of projects.

Frost regularly works with other musicians and artists; in the production of studio albums such as Tim Hecker’s Ravedeath1972 and Virgins, SWANS The Seer, Colin Stetson’s New History Warfare, and on various Bedroom Community releases. On the stage Frost has produced scores for Choreographers including Wayne McGregor/Random Dance, Akram Khan, and german Director Falk Richter. In film, he composed the score for the Palme d ́Or nominated Sleeping Beauty by Julia Leigh, and Djúpið by Icelandic Director Baltasar Kormákur (with Daníel Bjarnason, for which the pair won the Icelandic film award for best score in 2013). And in the visual arts, where, with artist Richard Mosse, Frost travelled deep beyond the frontlines of war-torn Eastern Congo to produce The Enclave; a multi-channel video and sound installation that premiered at the Venice Biennale in 2013.

2013 also marked the première of Frost’s first Opera, based on Iain Bank´s infamous 1984 novel The Wasp Factory. The project also marked his debut as a Director.

These various collaborations and alliances underline Frost’s continuing fascination with finding ways of juxtaposing music, rhythm, technology, the body, performance, text, art -beauty and violence- combining and coalescing the roles and procedures of various artistic disciplines in one place.