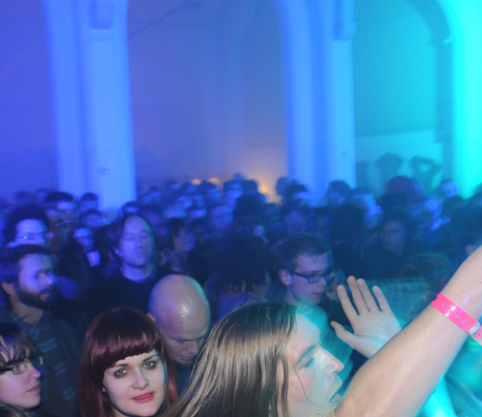 New Music Plus… – making the case for cross artform collaboration

Check out the programme for most galleries, museums, film or art festivals, and you’re pretty much guaranteed to see a musical vein running across their programmes. As Supersonic celebrates its 10th anniversary, we’ve joined forces with New Music Plus… to put together a panel featuring: Jo Beggs, Head of Development for the Manchester Partnership Museums, Will Dutta, Chimera Productions, Andrew Ellis of Samizdat and Lisa Meyer, Co-director of Capsule/Supersonic Festival and chaired by Julia Payne. As the people behind some of the most exciting music-led inter-disciplinary work in the country, our panellists will talk about why this work is important to them, and about how they make it work – artistically and financially.

Will Dutta is a producer, composer and pianist, and director of Chimera Productions, whose work connects the dots between modern dance music and contemporary and experimental art music. Will has worked as a producer with a range of organisations, including Tate Britain, the British Film Institute, De La Warr Pavilion and the National Portrait Gallery.

Jo Beggs is Head of Development for the Manchester Partnership Museums (Manchester Arts Gallery, the Whitworth, Manchester Museum and the Gallery of Costume). Jo led on the Whitworth Art Gallery’s involvement as a production partner in new Music Plus… North West, and will be talking about the Partnership’s commitment to including music in its programmes.

Andrew Ellis, a.k.a. Samizdat, has acted as a conduit for new and interesting music in Liverpool for the past five years. Andrews most recent project was working in collaboration with Liverpool Biennial to produce A Crimson Grail for 100 guitars and 8 basses at Liverpool Cathedral

Lisa Meyer is the creative director of Capsule, crafting extraordinary events for adventurous audiences, identifying some of the otherwise indescribable connections between contemporary music, performance and art. Capsule has gained a reputation as a dynamic arts producer with a unique vision and strong track record for delivering highly ambitious projects, which include Supersonic Festival, this year celebrating it’s 10th birthday. Home of Metal, a groundbreaking heritage project, which celebrates Birmingham and the Black Country as the birthplace of Heavy Metal through a series of large-scale exhibitions, events and archive. Capsule has just been appointed as the festival producer for the new Library of Birmingham, due to open in September 2013, it will be the biggest public library in Europe.

Julia Payne is director of the hub, a music development organisation that produces its own work and also provides consultancy, research and training services (www.thehubuk.com). She produced her first music events in 1993, and has project managed New Music Plus… since 2009.

New Music Plus…is a creative and professional development programme created by PRS for Music Foundation and run in partnership with the hub to enable non-music and cross-art form organisations to co-produce dynamic live music events with hand-picked music events producers.

Tickets are FREE to weekend ticket holders (places are limited and booking in advance is essential via [email protected] with ‘LISTENING’ in the title) or £10 https://www.theticketsellers.co.uk