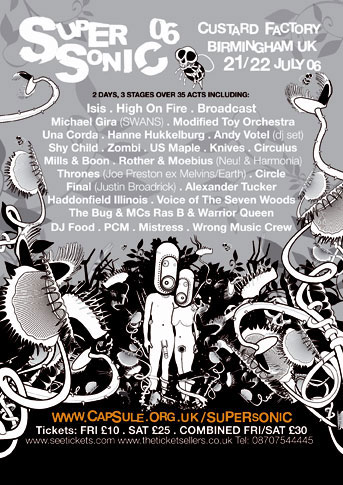 This year’s SuperSonic Festival, staged in Birmingham, UK, at the Custard Factory 21st/22nd July 2006. It’s a two-day event run by Lisa Meyer and Jenny Moore of Capsule, the driving force behind the UK’s most cutting-edge music events.

SuperSonic happens yearly and attracts a multitude of attention from all corners of the UK and further afield – there really isn’t another event like it in the UK that mixes such a prolific blend of artists.

“The Supersonic line-up’s determined diversity seduces an audience that can inhabit the more esoteric corners of the dancefloor or dwell, darkly, down at the bottom of the venue’s drained swimming pool. Regardless of any perceived clans, the whole crowd are united in their adorartion of carefully sculpted noise matter.”
The Wire