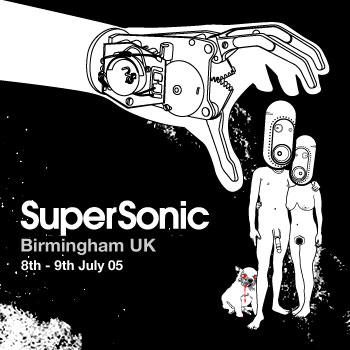 This year’s SuperSonic Festival, staged in Birmingham, UK, at the Custard Factory 8-9 July 2005. It’s a two-day event run by Lisa Meyer and Jenny Moore of Capsule, the driving force behind the UK’s most cutting-edge music events.

SuperSonic happens yearly and attracts a multitude of attention from all corners of the UK and further afield – there really isn’t another event like it in the UK that mixes such a prolific blend of artists.

“The Supersonic festival at the Custard Factory was one of the most ambitious and eclectic I have ever had the pleasure of playing at in the UK. The only thing that I know of that compares would be Sonar in Barcelona for diversity, setting, presentation and sheer love of music.”
Strictly Kev – DJ FOOD

Friday 8th of July
Capsule will join forces with legedary HOUSE OF GOD to bring two rooms of the best Techno/D&B/Jungle mash-up with special guests playing alongside HOG residents.

* Performances presented  in collaboration with the Ikon Gallery