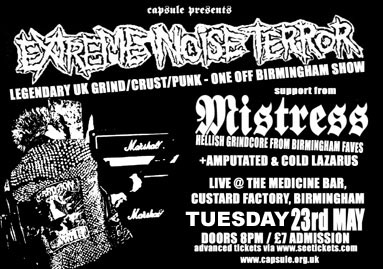 Extreme Noise Terror formed in January 1985 and at their first
gig were
immediately signed up by Manic Ears Records. The first release was
a split
album with Chaos U.K. ­ ‘Radioactive’ firmly stamping their caustic
arrival
all over an unsuspecting music scene, mixing metallic aggression
with punk
attitude, leaving an indelible impact, helped in no small way by
(at the
time) a totally original barbaric double vocal attack.
1987 Proved a significant year for ENT as Radio 1 DJ John Peel
became very interested after seeing the band live and offered them
a session on Radio 1.
Which was later released on vinyl by the BBC.

Formed in Birmingham during 1999, MISTRESS have released two albums
to date  “Mistress” and “The Chronovisor”  to rave
reviews and have gigged with the likes of NAPALM DEATH, MAYHEM,
ELECTRIC WIZARD, BOLT THROWER and EXTREME NOISE TERROR. Their
hard-to-pin-down sound comes across as a sickening
sludge/grind/doom hybrid, reminsicent of the early U.K. grind scene
of the late ’80s and early ’90s, and has been described as “a vile
musical bastard, a bilious, screaming, snot-faced sludge orphan
with all the taste and decorum of a sexual encounter in Wormwood
Scrubbs.”

COLD LAZARUS are a six-piece Melodic Death Metal ensemble
hailing from
Colchester in the east of England. United by the desire to forge a
unique
hybrid of dark atmospherics and thought provoking metal, they have
sculpted
a distinctive style of their own.
Lyrically, Cold Lazarus aim to express the malcontent of a society
in the
throes of urban decay, exploring themes of misery and the gritty
reality of
life in the 21st Century.